Canicrosser Georgie Lambert used to be a dedicated road and track runner, having competed at a high level for a number of years. She is also the area manager at successful sports specialist retailer Alton Sports. So you could say running is in her blood!

Yet after giving up serious racing she ended up “just plodding twice a week for the love of it”. But all the while feeling as though she was missing something!

That was when she discovered canicross…and it has totally transformed her approach to running. Not only that, it has given her a special bond with her gorgeous dog Benson.

We interviewed Georgie to find out exactly what she enjoys about her new found love, how it’s given her a totally new perspective on running and why she’s (semi) hung up her road shoes for trail shoes! 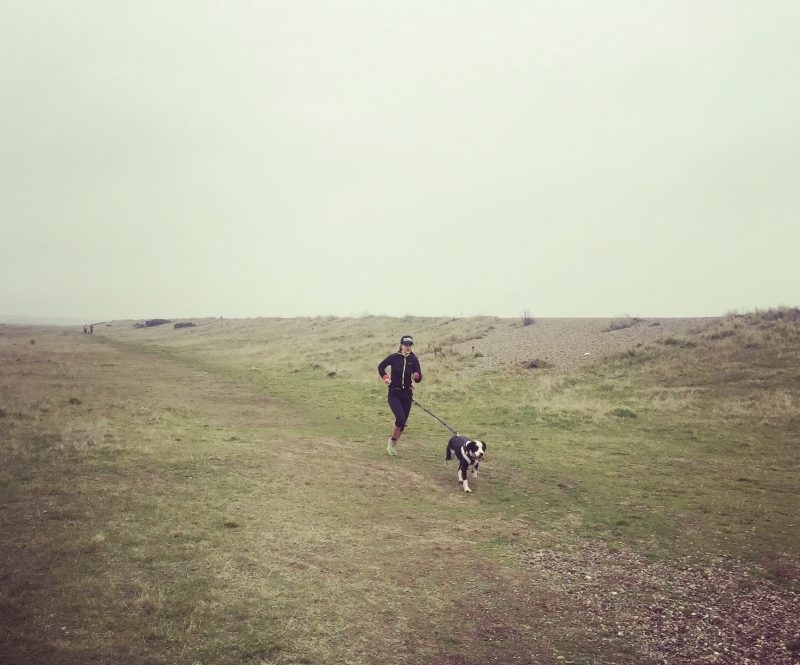 Ben was rehomed by us last January after we heard of his need of a new home from my hairdresser. The second we saw a photo we knew we were meant for each other.

His previous family still keep in touch and love seeing all the pictures of him. He’s everyone’s best friend with not one single bad bone in his body.

He came to us with a LOT of energy which made him extremely hyper, so the first thing we needed to do was get him on a regular exercise program to lose weight.

For the first 3/4 months Benson was extremely nervous if left him which is lucky as he is very rarely on his own as he has become the Alton Sports shop dog, loved by all.

He is now much calmer when left at home and understands we will always come back.

He loves balls! Although we don’t throw them for him for his own good he still takes other dogs’ balls at the park/local woods!

He also loves food (what dog doesn’t) he LOVES his raw diet!

I cant even think of anything he dislikes!……… except a hose off! 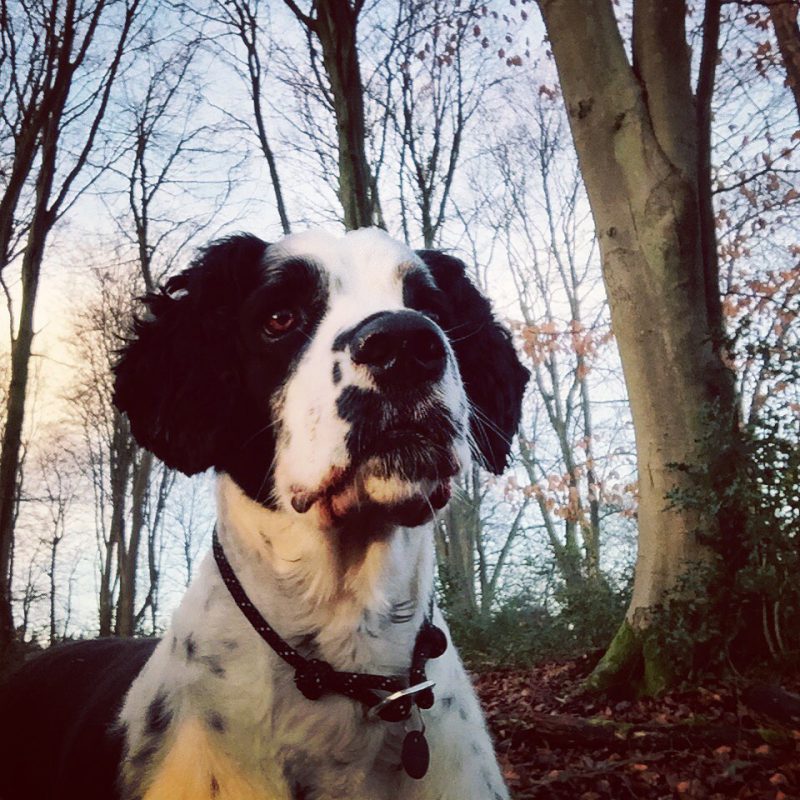 How did you first come across canicross and what made you take the plunge?

I always knew canicross was a sport but had no idea it was so social as well – much more than just human running clubs!

My love for dogs and Benson’s need to have a ‘job’ in life was the perfect recipe to take up canicross.

I googled like mad and DogFit came up. Great I thought, beginner’s classes – a dummy’s guide to canicross – that’s just what we needed. This was my first step to becoming a fully fledged canicrosser!

So how was your first ever canicross run?

We joined DogFit Trainer and experienced canicrosser Liz Evenden for a 1:1 beginners class in Farnham.

It was amazing – when Ben pulled we felt like a complete unit and the bug got me then! 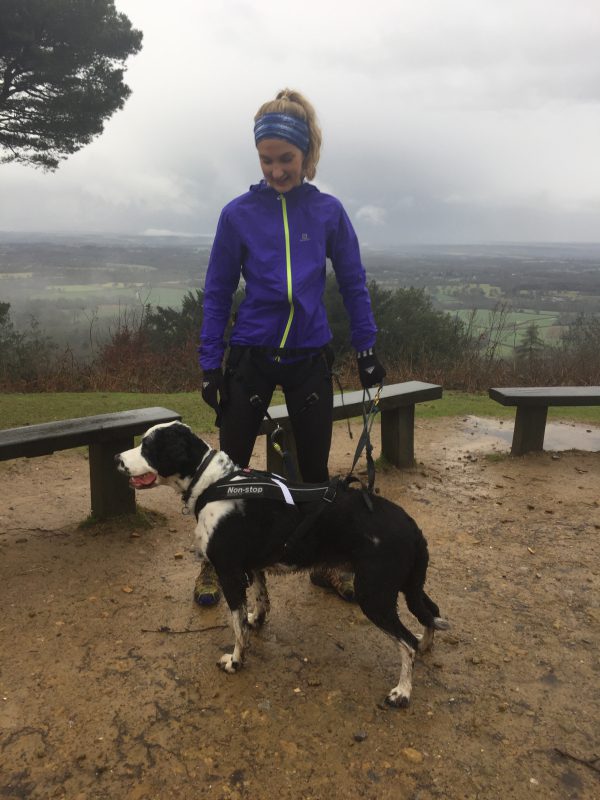 What difference has canicross made to your life?

Canicross, just like my previous running, has given me life satisfaction and a healthy body. However, canicross is something much more than this! I/we feel like a partnership, an ultimate force of love.

Maybe only other mad pet lovers will totally understand this but when I clip the line to each of us and hit the trails I totally forget about my daily stresses and daily jobs. This is our time for each other – mine and Ben’s – and the respect for each other grows with every run.

Running with a team (in my case the northdowns canicrosser group) completes the full endorphin release. Ben loves running as a pack with his mates, and so do I! 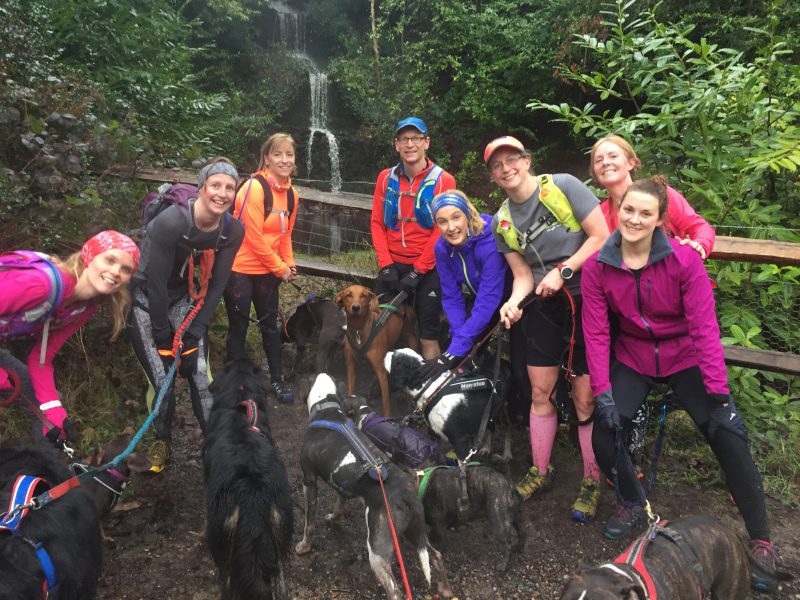 How has canicross benefited Ben?

Having an exercise program for Ben that gives him a job has really calmed down his outdoor behaviour.

When he was tired after runs I would do training with him, teaching him both commands for on the run and commands for in store/home life.

As he was tired and respectful of me after canicrossing these training sessions would work wonders. He lost his extra weight which increased his well-being and noticeably made him a much happier dog.

What would you say to someone who is considering giving canicross a go?

Go for it, its not clicky at all, everyone’s friendly! Canicross will get your exercise and your four legged friend’s exercise in all at once with added safety and bonding thrown in. 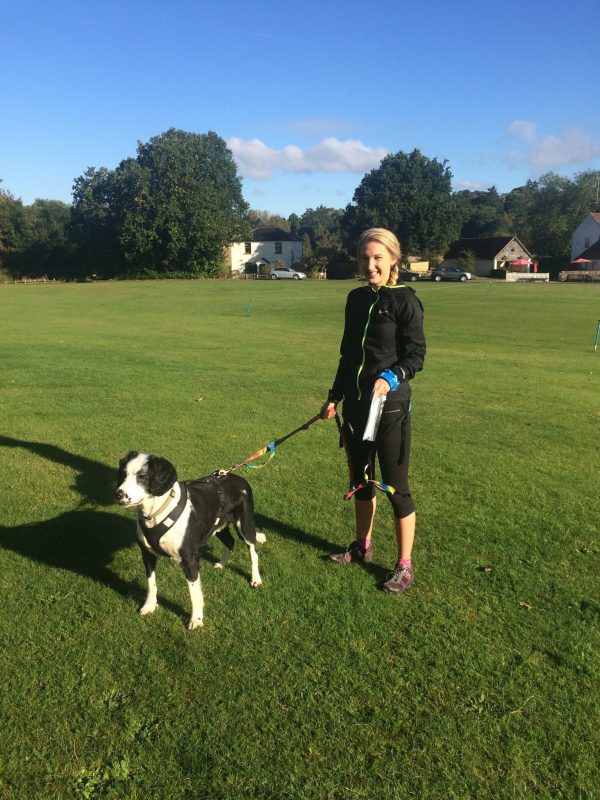 What do you love most about canicross?

Where do you run and what distances do you do?

Always off road, local woods – we always love finding new routes and exploring/ getting lost! Anything from 5K – 15miles.

How does canicross compare to other sports you do or have tried?

I love running but I definitely love my dog more. So adding these elements together is awesome and I don’t know how we could live without it.

I find the slightly less competitive training runs more fun compared to when I would train with an Athletics Club or road running club – less pressure and more fun!

3 responses to “My Story : From Road Runner to Canicrosser”