Claire and her gorgeous lab/cocker spaniel cross Buddy are probably typical of many of us when we first came across canicross.

Claire describes herself as being “pretty unfit” and “certainly not running fit” before she started doing canicross. She was doing a couple of exercise classes per week and walked Buddy twice a day but hadn’t run for years.

Fast forward just six months and Claire and Buddy can be seen regularly running in their local area, Wimbledon/Richmond, with their DogFit Trainer Sarah Norris or out with social canicross group the North Down Canicrossers.

We interviewed Claire (and Buddy!) to find out just what made canicross such a life changing experience for the two of them…and how they managed to complete their first half marathon together in less than four months! 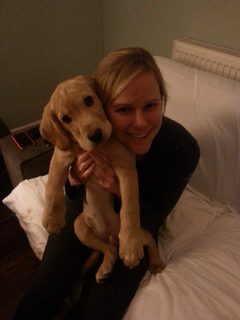 A canicross star in the making!

My sister encouraged me to try canicross for months but I was scared of being pulled over and didn’t think I was fit enough or would be able to keep up with Buddy. Then one day I spotted someone with their dog wearing a canicross harness on Wimbledon Common and bombarded her with questions. She told me about Sarah Norris, the DogFit trainer for Richmond and Wimbledon, and the rest is history.

YES!  I had convinced myself that I had let myself get too unfit, my running days were behind me, Buddy was too strong, would run in all directions and pull me over, I would end up face down and look stupid.  The reality of our first session was a huge amount of fun and nothing to worry about. 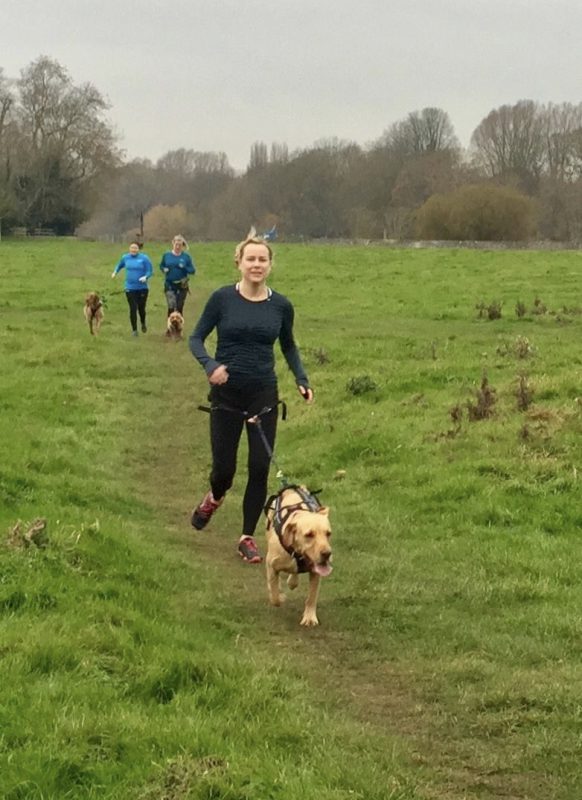 Training runs with DogFit have helped Claire and Buddy build up their running fitness in a structured and fun way.

I was ecstatic after my first DogFit session. First and foremost, Sarah set the pace and gave guidance on commands so I knew what to do (i.e. chill out). While I had worried that Buddy would shoot off in different directions, in fact he instinctively followed Sarah and her dogs. Secondly, I realised that the canicross human belt is different to a dog-walking waist-belt – it is designed to give stability around the hips so you don’t feel out of control if your dog pulls.

When I started running with Sarah I could only do a 5k walk-run. Three or four months later we did a half marathon. Left to my own devices I would never have considered a half-marathon but Sarah’s attitude is no-one gets left behind and it’s OK to walk. I also wouldn’t practise running up and down hills or do speed sessions on my own but they have massively improved my fitness and are important for Buddy’s training and fitness.

Buddy is a cross of two working breeds so has always been active. He pulls quite hard when in harness.  This makes running easier for me but I am aware of ensuring Buddy does not over-do it. Sarah helps with this – we stop regularly and whenever we encounter water. The dogs’ wellbeing and fitness are paramount.

Its hard to explain the feeling of running in harness with my Buddy. I had my purse stolen the other night and was really fed up the next morning so drove to Richmond Park, put our harnesses on and Buddy and I ran our fastest seven miles. The mood I was in, I wouldn’t have done one mile on my own. It’s teamwork. 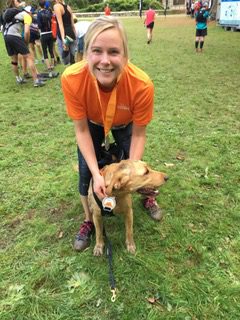 Full body wag 🙂  He particularly likes seeing his boyfriend Monty, one of Sarah’s springer spaniels.  Buddy likes to run shoulder to shoulder with Monty, which means humans have to run elbow to elbow!!

Absolutely amazing.  I have my fitness and (waistline!) back, an ever increasing circle of new friends, lots of events to look forward to in 2018 and it’s all down to running with Buddy through DogFit. 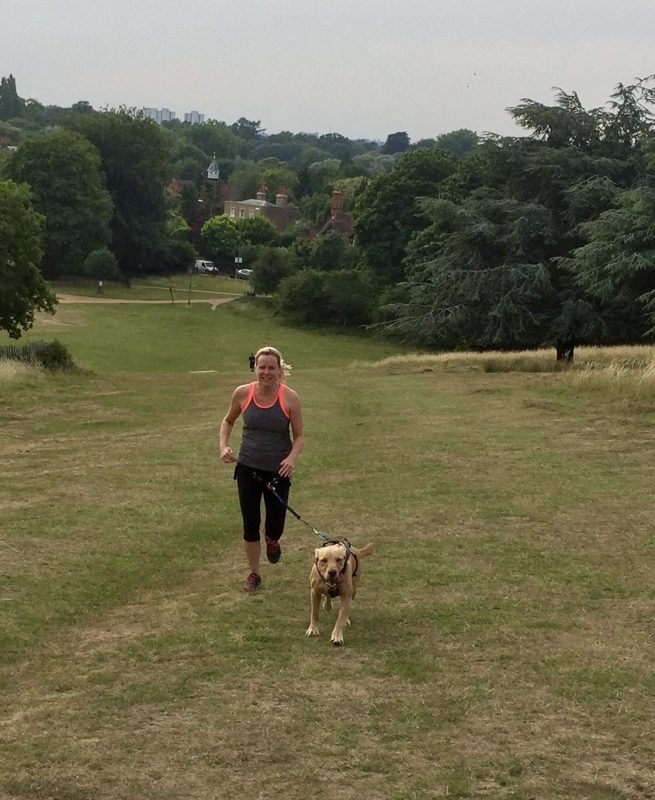 Buddy doing his bit to help mum up the hill 😉