My husband and I recently returned from our dream holiday – a week of dog mushing in Swedish Lapland, north of the artic circle.

Canicross originates from dog mushing. Aside from the different terrain and number of dogs, the principles are the same; the dogs lead out in front, they work as a team, and they rely on commands from the human. In fact, we learned that some of the mushing dogs they retire enjoy a spot of canicross. Though the dogs still working only do mushing in the winter and will have the summer off…it’s a chance to recharge their batteries and it’s often too warm for them.

So, as you can imagine, as a keen canicrosser and big dog lover, I was in my element. 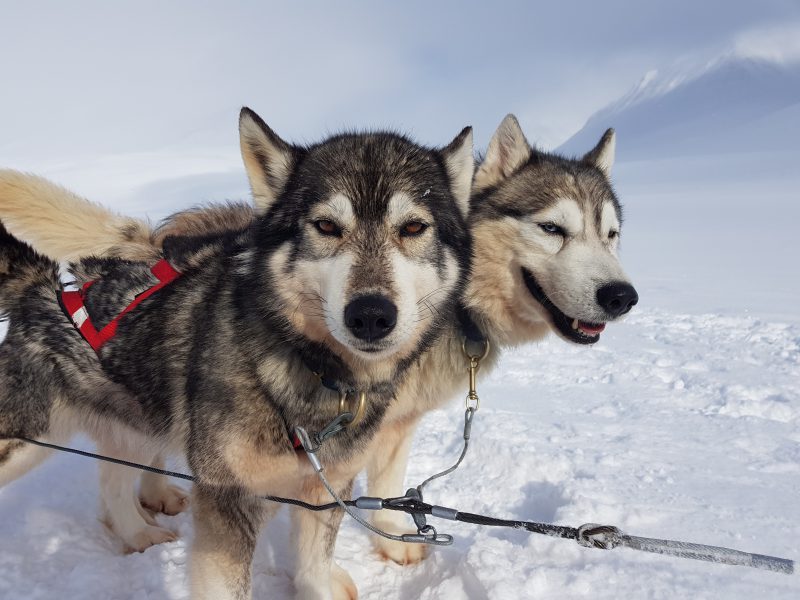 This particular trip took us north of our base in Kiruna and we spent six days and nights in the mountains, stopping in basic cabins along the way. By basic, I mean bunk beds in shared rooms, no gas or electricity or running water, and no wi-fi.

Aside from the group we were with and the occasional snowmobile and cross country skier, we barely saw anyone. It certainly made a welcome change from the rat race at home. 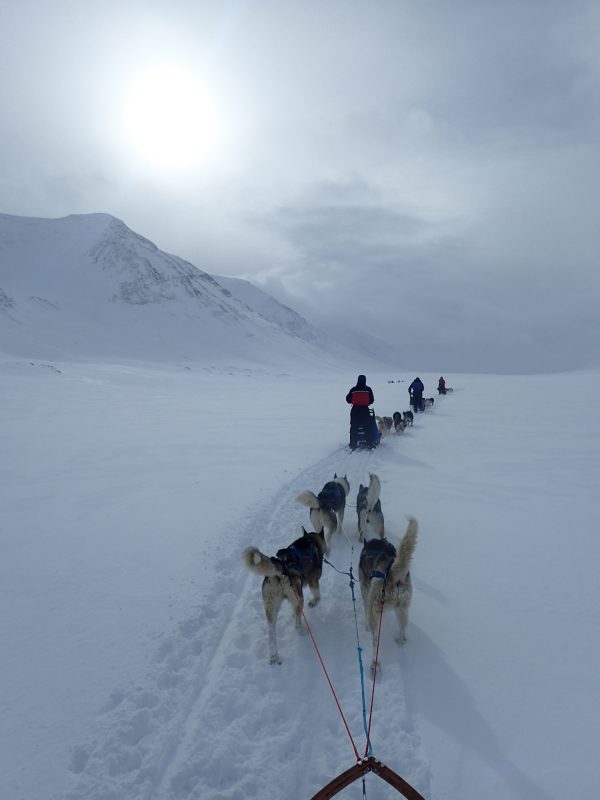 There were six of us doing the tour plus our guide who had his own seven dogs. All the dogs were either Siberian or Alaskan Huskies. Each of us had our own sled and four dogs. My lead dogs were called Tequila and Mix, and my ‘wheelies’ (back dogs) were called Herbert and Herman 🙂 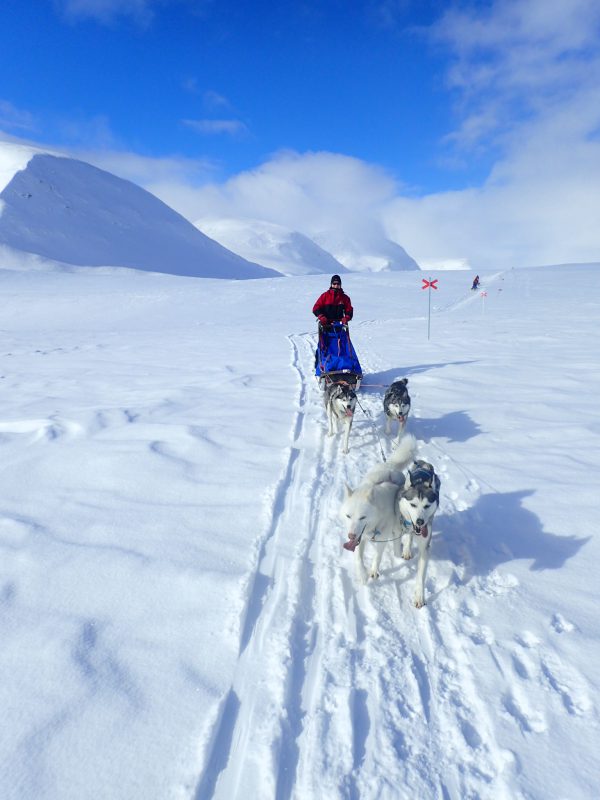 The best thing about the trip was that you got to experience the whole job of being a musher. We were responsible for looking after the dogs – harnessing and attaching them to the line ahead of each trip, feeding them, poop scooping (not an issue when it’s up to -15 degrees celcius), and giving them plenty of cuddles.

People tend to be surprised when I tell them how friendly the dogs are. These same dogs that get super fired up when they know they are about to go out for a run and can sometimes turn on each other in the excitement, are the most affectionate dogs I have come across. They just love human interaction. 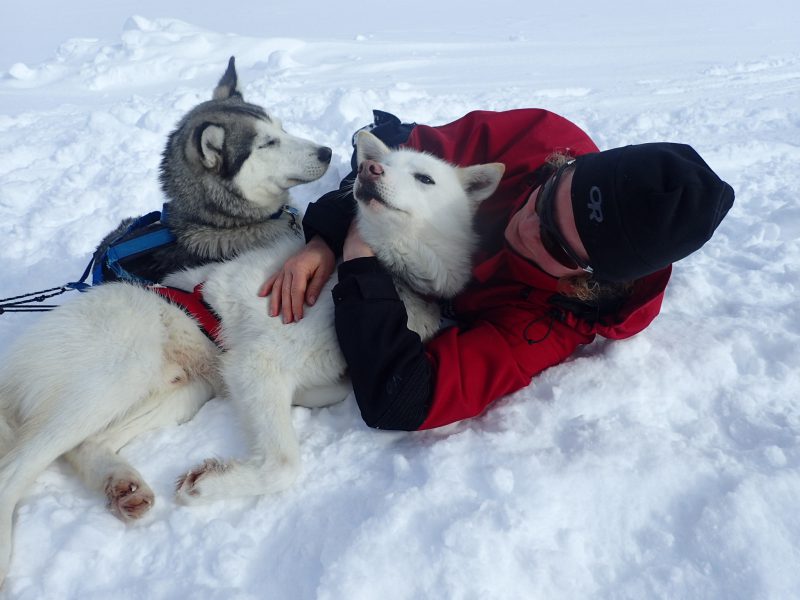 The other thing people are amazed by is that the dogs sleep outside on the snow without any coats or straw. The coldest it got was -15/20 degrees celsius and the dogs were still warm!

The route itself picked up the famous Kungsledden trail. It is a popular route for hikers in the summer and mushers and cross country skiers in the winter. As such, we were rewarded with the most beautiful and spectacular scenery, including a stunning back drop of Kebnekaise, Sweden’s highest mountain. 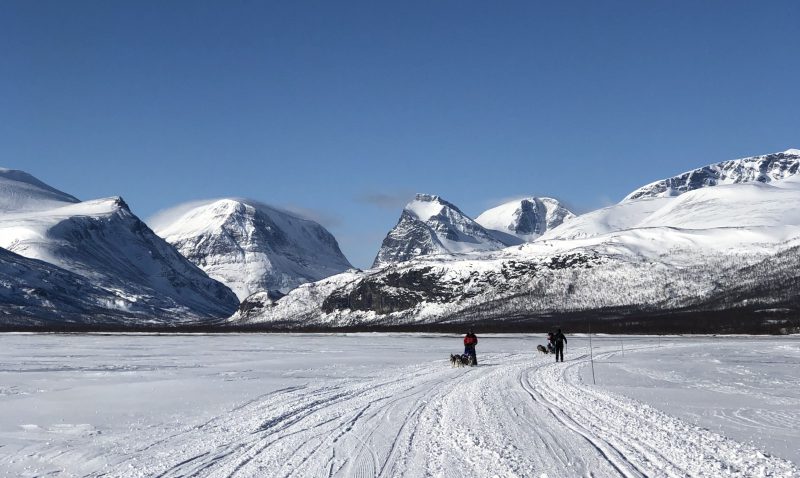 Because we were dog mushing in the mountains and on frozen lakes, we experienced a real mix of terrain. Some days we were in the valley and others were spent negotiating the ups and downs. When you have any notable incline, you are expected to help the dogs by either pushing off with one foot or running behind the sled (while still holding on to the rail of course!). And with the downhill sections, you could really get a good pace going. With this, the occasional bump in the terrain, turns to negotiate and ice to cross, it was a challenging excursion at times…but it was great fun!

The whole trip was an amazing experience and one I will never forget. I just hope my own dogs forgive me one day for cheating on them 😉 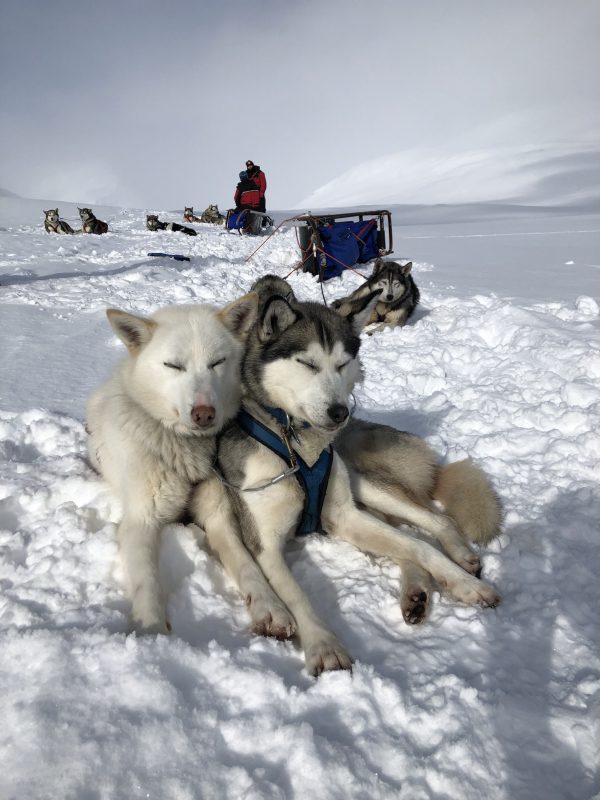