Lisa Chitterden’s story is one many people will be able to relate to. In her fifties, she was struggling with health issues that included anxiety and depression and feeling unfit and over-weight. She knew something had to change but needed an outlet that not only helped build her confidence and fitness but was also fun and involved her two dogs that mean the world to her.

Lisa has been running with Sarah Norris’s group in the Richmond/Wimbledon area for the past couple of years and since that ‘first date’ with canicross she has never looked back.

You can read Lisa’s honest and inspirational story here…

Tell us a bit about your two dogs?

Harry is a 5.5 year old cross Jack Russell and Bichon Frise. We have had him since a pup. He is a very naughty terrier…but also very happy! He can be grumpy but in a naughty terrier way. But the canicross group love him. I have never been able to get him to run in front which is why I got Millie. But he loves to join us on short runs because he has little legs!

Millie is my Sprocker. She is 15 months old. I got her especially for canicross as I had fallen in love with the sport and wanted a stronger dog. She is very sweet but quite timid with other dogs – although she now loves to run with the pack which is has been wonderful socialisation for her.

We also do agility which Harry is particularly good at 🙂 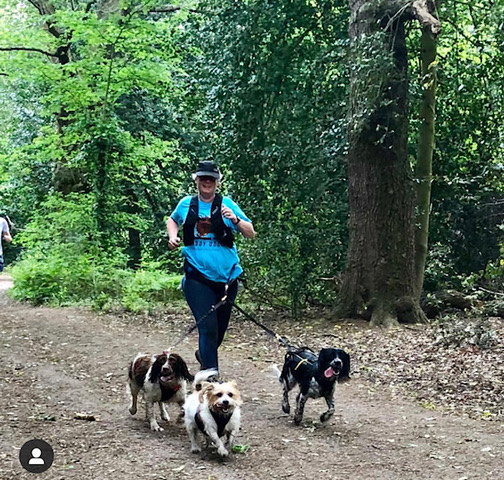 How did you discover canicross?

I was doing agility with Harry when I thought I needed to be fitter to run the courses. I had seen articles about canicross before but didn’t really ‘get it’.  So I just did a google search and came across DogFit where I found Sarah Norris, one of DogFit’s Trainers. I was really unfit when I started in Sept 2016 – I was 51 and in the middle of my mid-life health crisis!!  Sarah was incredibly patient with me because I could only run about 50 yards before spluttering and feeling like I might die.

Harry loved the running – he thought it was great fun, but his typical stubborn terrier attitude was “why should I pull?” 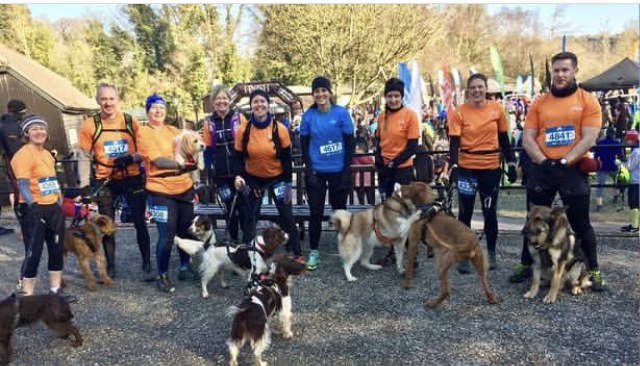 Were you doing much exercise before you came across canicross?

I had not run since I was in my mid 30’s, but had just started a 0-5k app on my phone, although not getting on too well. So my exercise level was based on doing yoga 1-2 times a week.

I was (and still am) overweight – due to menopause, a sedentary job and too much food!  But the wonderful thing about canicross is that it is and has been the only exercise that I really want to do. My dogs are everything to me (much to my partner’s upset!) and I just love doing activities with them that we all enjoy.

I love hanging out with my dogs – that is the main thing – plus I have really enjoyed meeting other crazy dog people who want to run around in the sun, rain and wind.

It is such a social sport and Sarah has facilitated a group that is really great and friendly. It’s all about enjoying the experience, not about who does best. The dogs are the focus and ensuring they are well and enjoying it too. 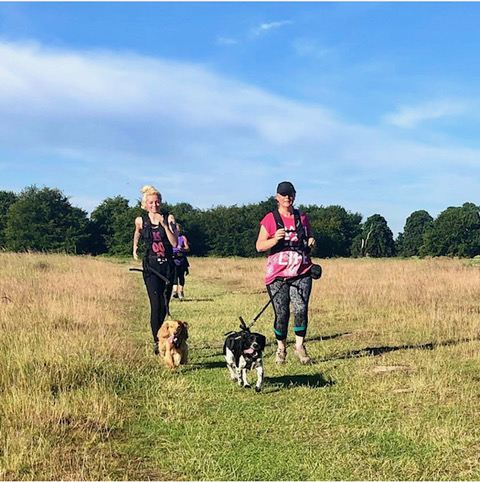 How has canicross been a positive experience for you personally?

Canicross has literally changed my life for the better. I am significantly fitter – even my health check proved that my heart and blood pressure are very good for my age. I never expected to get fit again, especially not in my 50’s.

However, the biggest impact has been on my mental health.  I have suffered from anxiety and depression my whole life, but when I am running my mood is so much better and I have rarely had the down days.

I really noticed it when I was injured because I could feel the negativity coming back. Not only is it something that I love to do now, but it helps me physically and mentally – how good is that?!? 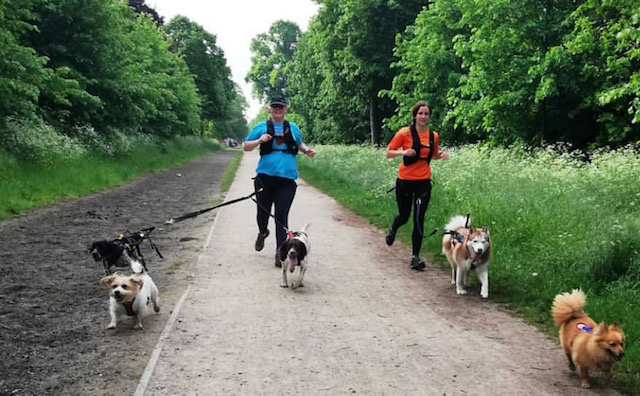 What other benefits are there from joining Sarah’s classes?

The friendships I have made have been a lovely benefit to the sport. I have met like-minded people who have become more than just running buddies – although it is all still about the dogs!!

And what impact has canicross had on your dogs?

Canicross has been different for each dog.

Harry has benefitted from getting a bit fitter – he (like me) could do with losing a bit of weight and his fitness is helping this. He has had to learn to be more socialised around other dogs because he does suffer from jealousy issues around me.

Millie, being a sprocker, just loves to run, and I think she really enjoys the element of us working together.  She is a working breed and looks to me for instruction. Her fitness is also improving and sometimes it is the only way to tire her out! 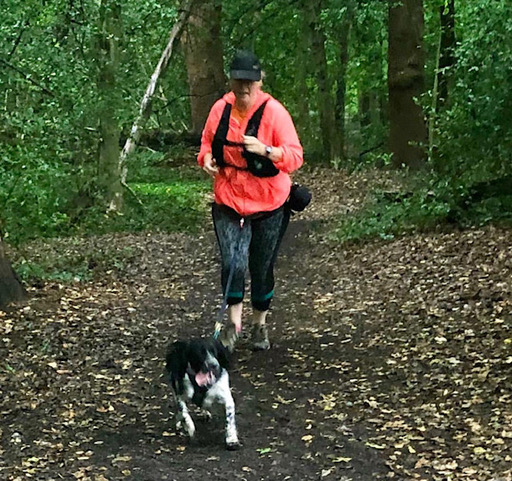 If someone was thinking about doing canicross with their dog what would be your advice to them?

Just do it. Don’t worry about your fitness level – everyone is really friendly and encouraging. Find a local group/DogFit Trainer that is doing intros/couch to 5k, if you are a new starter. I was, and even though I was very slow in improving my fitness, I am SO glad I stuck with it…..  I love it!

But make sure you have the right kit for you and the dog. Trail shoes are invaluable and having the proper canicross kit, especially the harness for the dog.

I find the dog is more inclined to run with a group as I think they love the excitement of the pack.

What types of canicross runs do you and your dogs do?

We do trail running, mostly around Richmond Park/River and Wimbledon Common.  I aim to run three times a week but sometimes it is a couple of times.  Most runs are 3-5 miles ish.  All year round. 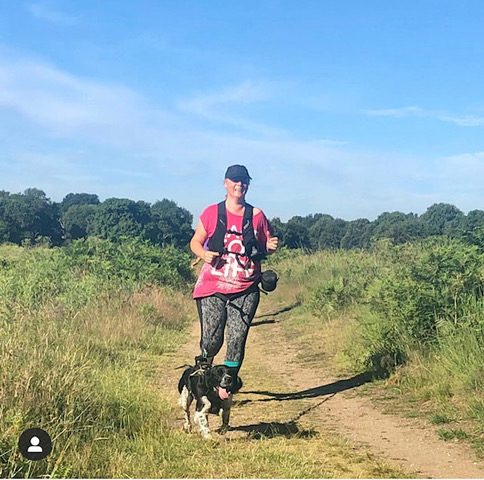 Are you training for anything in particular at the moment or working towards any goals/targets?

I do some of the races that allow canicross (such as Maverick) – something else I NEVER expected to do.   So we are trying to get our strength back for some of those this autumn – although we have two big challenges in the next few months which will be a combination of canicross and canitrek. Both of these are in Brecon Beacons; a 10 mile race in October and a canicross weekend in April which is three days of canicross races from 5k – half marathon (which might be lots of walking!). I just love to be out with my dogs!

If you could sum up the effect canicross has had on your life in one sentence, what would you say?

Canicross is my favourite time of the week. Being outside in nature all year round, with my dogs, friends, and the coffee at the end of it!  The most life enhancing thing in my week. 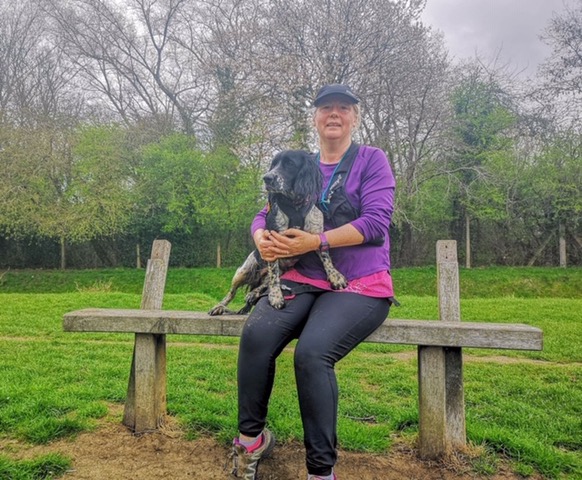