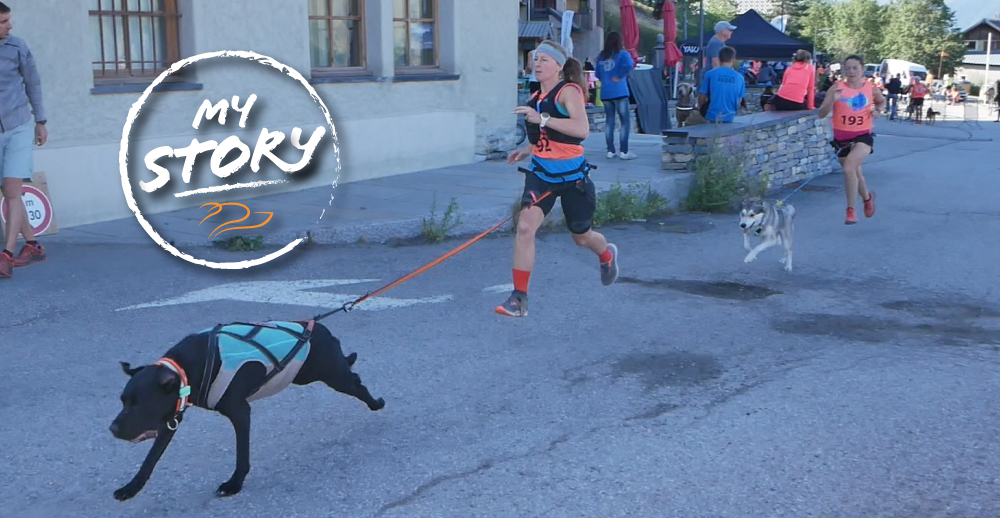 It was August 2018 when I first heard of TDM (Trophee des Montagnes), through a friend from Germany who was there competing. Seeing the amazing photos with spectacular scenery, but also the grueling challenge of 10 races in the mountains in eight days, I knew I would love to be there in 2019.

I have to thank my husband for agreeing that our summer ‘holiday’ would be a running adventure in the French alps with the dogs.

Leading up to the event in August 2019, my preparation and training was mixed, with it being difficult to prepare your (and your dogs’) bodies for running 10 races consecutively, but also on mountain terrain, when you live in a pretty flat region. Based out in Nuremberg, Germany, our local runs are lovely forest trails, but soft, not too technical and certainly not mountainous!

I signed up to a few trail run events and these were the best preparation I could have had. I ran in Innsbruck in May with my JessDog for both the nightrun (7km with 400hm) and the K15 (17km with 600hm). This was my first real experience of running in the mountains with the dog, and really highlighted the importance of the ‘behind’ command, to ensure you stay on your feet on the downhills (the cheese at the aid station was used for treats and saved me)! Also, in May I ran the Canicross Trophee at the StrongDog Outdoor Festival, which was four stages over just two days on some hillier terrain.

After a 960km drive, we arrived in the French mountains, in the Alpe D’Huez region, where we would be staying in the caravan for nine days for 10 stages totalling 65km with +3300m, -2800m. The event is split into four stations (regions), Oz on Oisans, Villard Reculas, Allemond and Auris on Oisans. We chose a campsite in Allemond where a lot of other runners were staying too, so there was a lovely social side and always someone to ask for advice.

You can register two dogs to run with, but unfortunately due to a paw injury of my younger dog Poppy, my JessDog would be running all 10 stages! I was really nervous if we could both survive this together, so our main aim was to have fun, stay injury free and complete TDM 2019.

For the first race I found the mass start really overwhelming with groups of 40 starting every 30 seconds! We got off to a flying start, quite literally and I fell on my face after about 20m when finding a large hole. JessDog ran great, we felt strong on the ups, but with all the excitement struggled with the ‘behind’ command on the downs. We used this as training, and I would stop to put her back behind me each time and in the end were super happy with our starting run.

Starting in groups of three at 30s intervals, this route was literally up up up and finishing at the top of the ski lift! Actually, we loved it – the early start meant fresh air and blue skies rewarding us with some beautiful views on the trails up. JessDog was a superstar and although a lot of strong pulling dogs passed us, she was just great and never gave up.

This stage is known to be the most beautiful of the whole TDM, with the travel to the start line up the ski lift! However, for me it was one of the toughest; imagine standing waiting for a ski lift to take you up the mountain with 300 other excited dogs and humans! I was totally exhausted before the race even started, from holding Jess and keeping her as calm as possible. It certainly was amazing scenery, but with pretty technical single, rocky trails I was concentrating so hard and only able to look where we were going! It was the tour of three lakes, so of course my lab x springer pulled me in every natural water stop along the way, but a great chance for her to stay hydrated and cool off too! 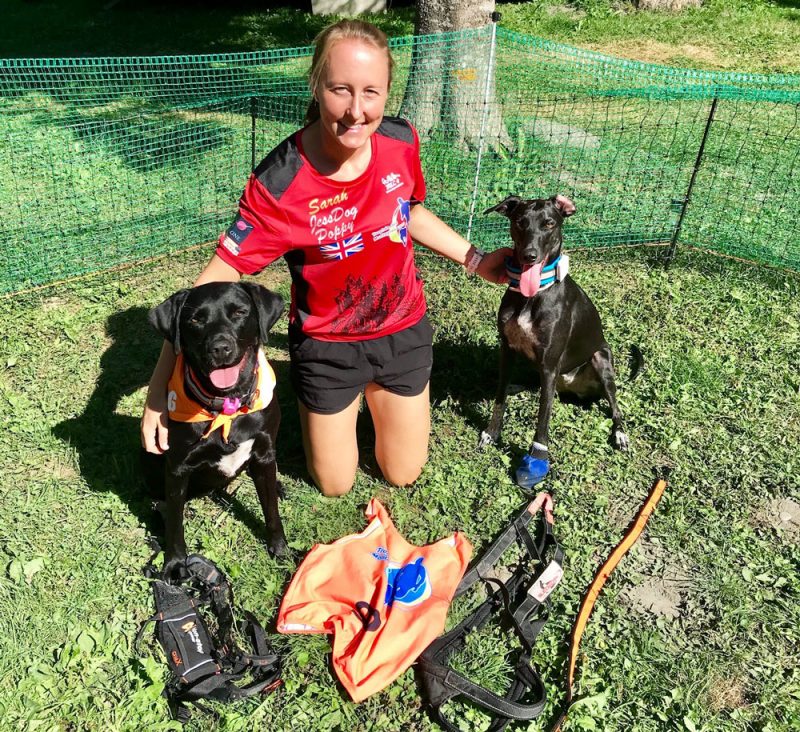 This was the most runnable course of the event, yet it felt strange to get the legs moving again! Thanks to a fellow Brit runner catching us so quickly at the start, it gave JessDog someone to chase on the uphill. There are also ‘free dog’ sections on the downhills where the gradient is very steep and trails technical, which we loved, since Jess’ recall is so good I can let her off and we fly down together! The end of the route was a final few kms along the river back to Allemond town.

Up until now the challenge had been the sunshine and heat, meaning that I was putting a cooling vest on Jess and also carrying a hydration pack for both of us. This was the first day where the weather changed, giving a very difficult start in the pouring rain and storm.

There was some tricky running across the fields at the start before reaching nicer soft trails with some fun ups and downs! A lot of command work with JessDog on the first part of the main downhill before reaching a shorter free dog zone, where she was super happy to be let free!The final km was all up, so we were very grateful once we started hearing the encouragement from supporters near the top. JessDog was fab in this stage in the cooler conditions, my superstar doggy! By now, we were halfway there, legs were feeling ok other than awfully tired and heavy! You were kept going from all the other friendly competitors who were also stretching, using the foam roller and doing yoga at the campsite!

I remember stage 6 to be really tough, both feeling tired with a lot of kms and elevation in our legs. Despite that, JessDog flew off the start for a 3:43 first km but then 2-4km was basically all up! The downhills were even harder, not due to the course or terrain but JessDog really wouldn’t listen, I think we were both in need of some recovery, which we had, since the following day was a night run.

Usually the night runs are Jess’ favorite and time to shine but the conditions for this were tough, still super-hot. Unfortunately, an organizational mess at the start meant a long wait in a ‘tunnel’ of dogs going crazy and they had to scrap the official start times! We still made it round ok, I had to use my own legs to make it up the climb but actually Jess was tired on the down which made it easier for me to keep her behind. 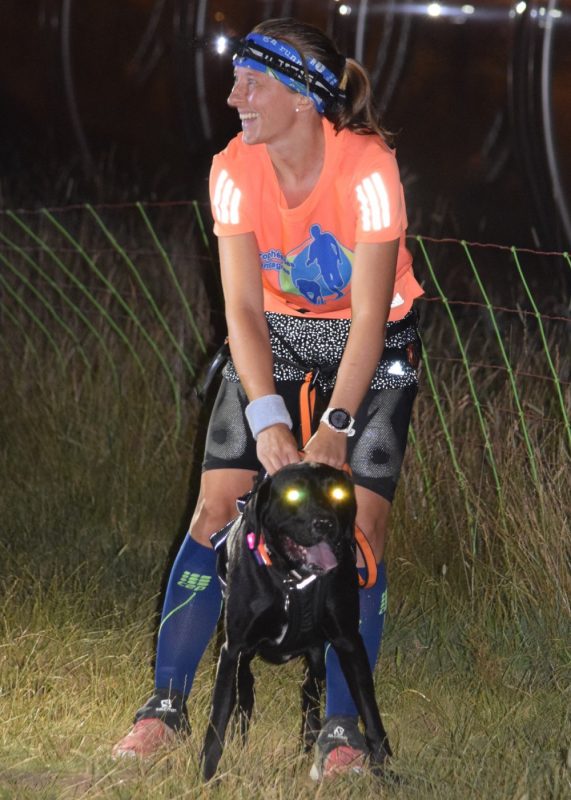 This was the second stage to have a mass start, and albeit carnage, fortunately it wasn’t me that fell that day and JessDog powered us up the first climb! We were in a strong group of 40 but managed to maintain our ground up the ‘21 bends’, with a nice drink stop at the top and kept the legs moving on the down and to the finish, it felt good to get that one done!

By now the end was in sight, I was excited and proud to be so close and motivated to run harder! This route was the same as stage 7, so despite the legs feeling very heavy, we ran strong for a faster time than before.

Being the final leg, we gave it everything we had even in the scorching sunshine and in the end possibly our best performance of the tour. It was a lot of elevation over only 5km, but once we had reached the top, we were so excited and flew on the downs to the finish line. Words can’t describe how proud I was and still am of my lovely chubby labby, so consistent and ran amazingly on every single stage. We actually felt stronger as the stages went on, bonding more throughout and Jess really understanding the behind command by the end. Our mountain dream came true, and not only did we finish it, but came 22nd in female senior category, with about 100 starters.

I’d definitely recommend this event to anyone who wants a mountain challenge and loves to be outdoors with their dog in beautiful scenery. We miss the mountains, people, dogs, trails and nice food already, so hope to be back in 2020!

Sarah Gillam is a DogFit Trainer based in Germany. You can read more about her classes in the Nuremberg/Bavaria area here.