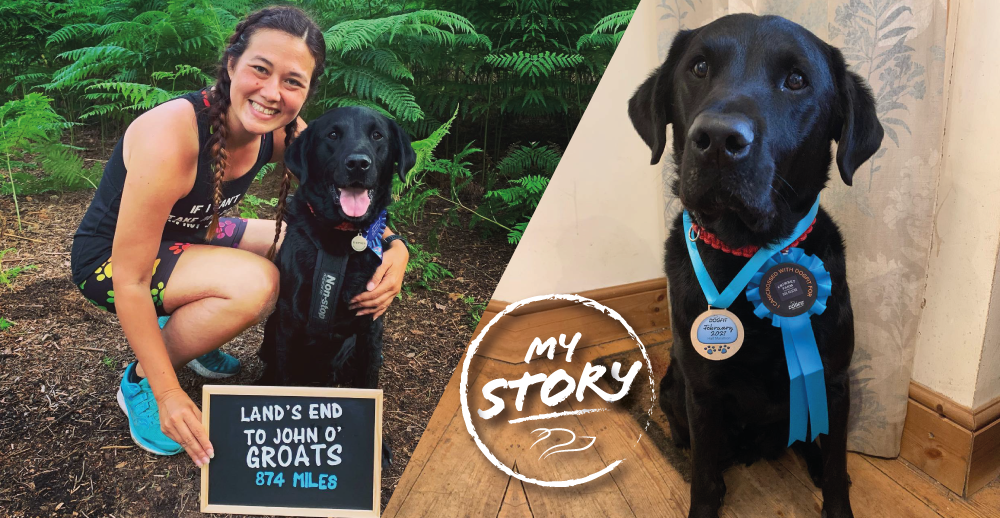 If someone had told Sue-Lee Fullick five years ago that she would be setting herself a challenge to run the equivalent of Land’s End to John o’ Groats in less than 12 months she would have told you to take a hike! But that’s exactly what she did…and not only that, she did it in half the time.

After discovering Canicross with her faithful companion Darwin, Sue-Lee went from pretty much a non-runner to running most days…and most importantly, loving every minute of it.

So what’s her secret and how can others draw inspiration from her story? Well, Sue-Lee tells us why Canicross has become such an important part of not just her life but her dog’s too! When did you first discover Canicross?

I’ve been Canicrossing for five years now having been encouraged by one of my work colleagues to come along to a taster session with DogFit where we got to try out the kit. Up until that point I had tried a tiny bit of road running and used to run on a treadmill at the gym but when I got Darwin I gave up going to the gym as that took up too much time when trying to fit it in with walking Darwin. So I thought that Canicross would kill two birds with one stone; aerobic exercise for both of us outside in the fresh air!

Tell us about your special running partner, Darwin?

Darwin is a 7 year old black labrador. He comes from working stock so Canicross is brilliant for him as it’s both physically and mentally stimulating for him. He loves going for a run and meeting up with both his hooman and canine buddies. His favourite things, aside from Canicross, include FOOD (he’s very very food orientated), sleeping after a run, visits to the beach…but number one is just being with me and keeping me company no matter what I am doing. What do you personally love most about Canicross?

I love the fact that I never run alone. I always have a running buddy to keep me going no matter the time of day or how bad the weather is. It means both Darwin and I get exercise at the same time in a fun and sociable way. I have made so many friends over the past five years from so many different walks of life who I would never have met if it weren’t for Canicross. We all have one important thing in common, our love of our dogs.

I have also discovered so many wonderful areas locally that I would never have known were there prior to starting Canicross and joining my local group. I also love how supportive our fellow Canicrossers are – we celebrate our successes and will support and assist each other if one of us needs help. Canicross is clearly a big part of your life – how important is it to you?

It’s a massive part of my life and my social life. Running for me, especially over the past 18 months of lockdowns and restrictions, has become a substantial and effective coping mechanism for stress and has been an important part in maintaining my mental health.  I love the fact that going for a run with Darwin and friends sets me up for the day or helps me decompress after a day at work.  It’s just being outside in the fresh air, with friends and family, like-minded people and their dogs just chatting and laughing about whatever comes to mind.

I suffer with social anxiety and so when I first joined my local Canicross group it was often overwhelming to turn up for a run with people I didn’t know. However, having Darwin there meant that I already had an ice-breaker as everyone was interested in each other’s dogs. What has started as just a way of keeping both Darwin and I fit has developed into friendships with people I would never have met otherwise. You recently took on the epic challenge of running the virtual equivalent of Land’s End to John 0′ Groats. Tell us more about this.

Darwin and I recently completed a virtual challenge to run the equivalent distance of Lands End to John o’ Groats (874 miles) in 6.5 months, along with my friend Vicky Doleman and her two pointers. We started on 1st January 2021 setting ourselves 12 months to complete it. I signed up as a way to motivate me to keep running through the winter months and lockdown V3.

Basically after every run we logged our mileage onto the LEJOG website which kept track of our location on a virtual map. The timing was great as I had already agreed to keep a couple of friends company on some of their marathon training runs and so it motivated me to test my running distance limits.  I originally said I wasn’t going to go over 15 miles, and ended up running a 21 mile run! All useful miles though towards hitting my target. It meant that I ran in every sort of weather you can think of; snow, hail, ice, rain, mud – so much mud! Just to make sure the mileage kept ticking over.

We completed the distance on 14th July, and to celebrate we headed to the pub for a couple of large gins! You and Darwin have also taken part in the monthly DogFit virtual challenges – how important were they in helping you to reach your big target?

They have been a huge motivator. Darwin and I have run a half marathon DogFit challenge every month since November 2020.

As well as adding really useful miles to our journey to John o’ Groats, in entering the virtual challenges we have helped raise money for some wonderful dog charities. Plus it’s always a good excuse to go for a long run and gossip with my friend Vicky and her pointer girls.

I love the fact that not only do I get a medal each time but Darwin receives a rosette. We’ve completed every challenge since it started and hoping to get the full set of 12 for 2021. So the big question – what’s next for you and Darwin?

Well, firstly we’d like to complete a half marathon every month for all 12 of the DogFit virtual challenges.

Vicky and I are also planning to start the return journey from John ‘o Groats to Lands End in October this year to give us the same motivation to keep running through the winter months when it’s harder to get out to run when it’s dark and miserable weather.

Also, having said I was never going to run a marathon, I’m seriously considering running one next spring as the training I did with my friends has given me much more confidence in relation to my distance running. Finally, what advice would you give somebody who is considering giving Canicross a go?

Try it! If someone told 20-year-old me that at 41 I would be running 21 miles over the trails and hills of West Surrey I would not have believed them. At a school I hated running! I was a swimmer and more adept at field rather than track when it came to athletics. I never considered myself as a runner and still don’t, but running with your best four-legged friend along the trails is the best thing ever.

I would have said that Darwin and I had a good bond before we started running together, but our bond now is amazing. He’s just as elated as I am at the end of a good and challenging run. We have to work as a team. My father is still amazed at the fact that Darwin understands his left and his right when he takes him out for an off-lead walk!