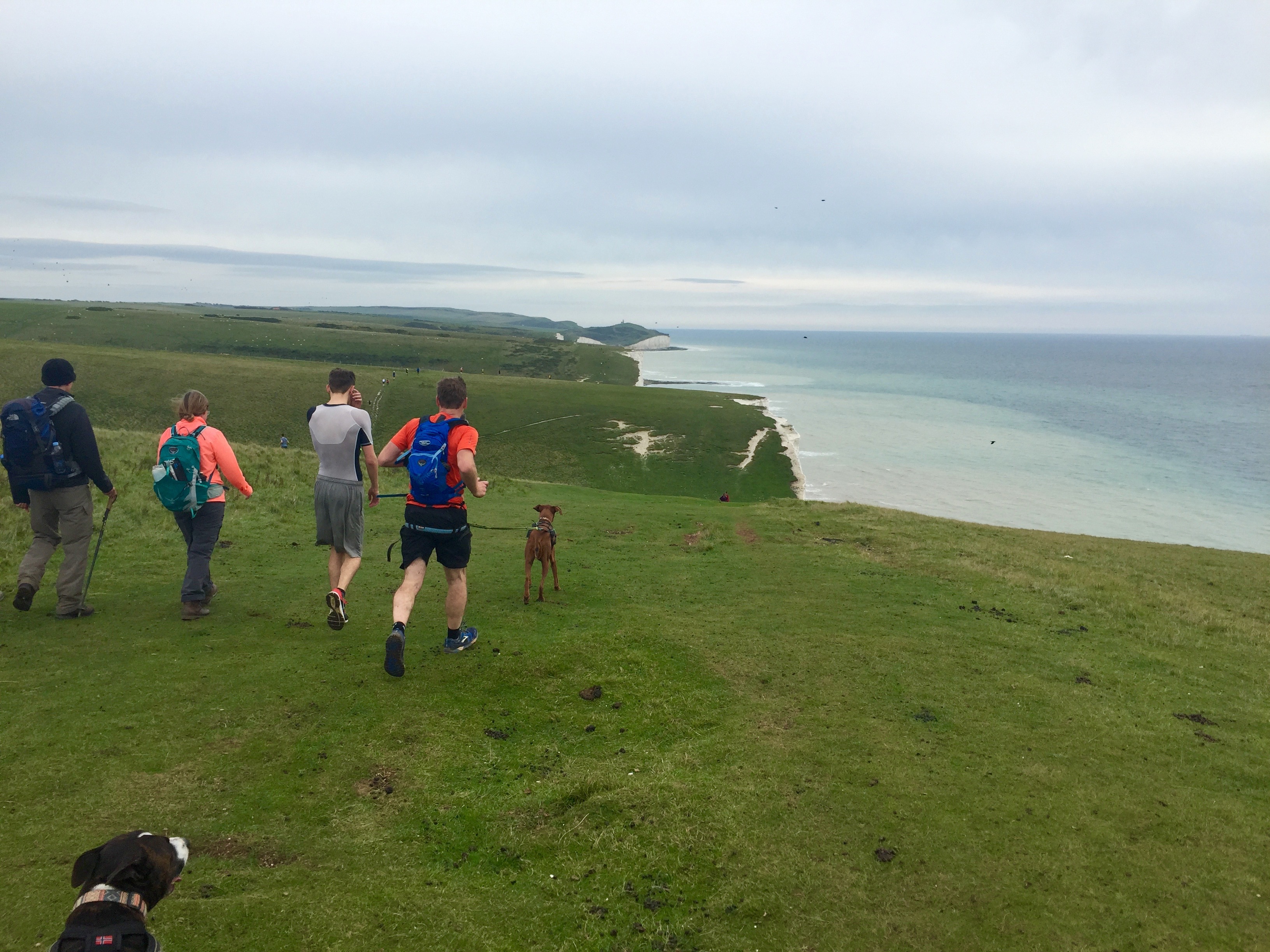 This had to be the toughest canicross event we have done to date with the dogs but also the most beautiful and most rewarding!

The Beachy Head Marathon (Eastbourne) was a very scenic yet challenging race along the South Downs National Park.

Not for the faint hearted, the (just shy of) 42km route had countless ups and downs that amounted to a total ascent of 3,500ft. About the same as going up Snowdon then! In fact, the race organisers suggest you allow up to an additional 40 mins on top of your usual flat road marathon time. So, this gives you a good idea of how hilly it is. Still, it didn’t put many people off as there must have been over 1,500 runners taking part.

After a climb immediately from the starting block, the route took us inland and we ran in a north westerly direction before looping back round, with the final 10km tracking the coastline – which sounds lovely until you realise it means taking on the Seven Sisters! Runners gathered at the start…and, yes, we were going up that hill!

The route itself passed through Jevington, Alfriston, Litlington, Friston Forest, the Cuckmere Valley and Seven Sisters, including Birling Gap and Beachy Head. Some of these spots doubled up as spectator-friendly cheering points which proved a much welcome boost to spur us runners on. We were even treated to the bagpipes early on in the race! This really was a beautiful course!

The route did include a few gates, a couple of stiles (a wooden one and a stone one) and a couple of bridges as well as two flights of steps but these were all very easy to navigate with the dogs. What goes down must go up! We most definitely walked this section!

The only thing I would point out is that there were a few narrow paths, especially early on, that made it awkward for overtaking, especially when you are attached to a dog. I did have to rein in the line often, out of courtesy to the dogless runners.

The start itself was pretty crowded and it took a while to get into a groove as a result. It may be better in the future to allow the canicrossers to set off separately from the mass runners; just 10/15 mins before or after perhaps(?).

That said, this was a really friendly event and we spoke to so many people en route who seemed to love the fact that dogs were taking part. As a result, hopefully this will encourage more people to enter as canicrossers next year 🙂 The climbing was worth it for the amazing views!

The terrain was hard and mostly grass, track or chalk (as one would expect for this area) so I didn’t need trail shoes that were terribly grippy. I wore my Inov8 Trailrocs (with medium grip) for this race, which were perfect. This was typical terrain along large sections of the race As for parking and registration, this was all very straightforward.

Parking was along the roads. Just ensure you allow plenty of time to find a space in case you have a short walk to the start area.

Registration was also easy. Located at the start area, you could either register the day before (3-8pm) or on the moring of the race (7-8:30am). Here, you collect your race number and timing chip. The timing chip was a plastic chip that we had to thread through our laces (if you can’t do this, it’s worth bringing a garden tie with you).

The race then started at 9am (for the marathon runners) and 9:30am (for the 10km runners). Caonicrossers were made to feel very welcome at the race 🙂

The marshalling was excellent with people at all key points along the route. They were very friendly and really cheered on the dogs. 🙂

There were at least five check points along the route that provided refreshments – generally water and squash, as well as snacks such as small pieces of mars bar and banana, biscuits, cake and even sausage rolls!

There were water bowls for the dogs at every stop aside from two of the check points. I’m not sure if this was an oversight? Irrespective of this, over this sort of distance, I would always carry water for the dogs just in case.

The finish line was at the bottom of a steep hill (back where we started from) so unless you have strong knees (and any energy left!) it’s not conducive to a sprint finish. Once across the line, we received a medal and some refreshments. There was no t-shirt or goodie bag but I didn’t expect this given the great value to enter the race at £36.

This was a fantastic race. Yes, it hurt at times, but it was a beautiful course, well organised and marshalled and very friendly.

And, if you don’t fancy taking on the full marathon distance, there is an option to do 10km (just £15 to enter). So there really is something for everyone! Super Sid pulled all the way round, proving he really is my Personal Trainer 🙂