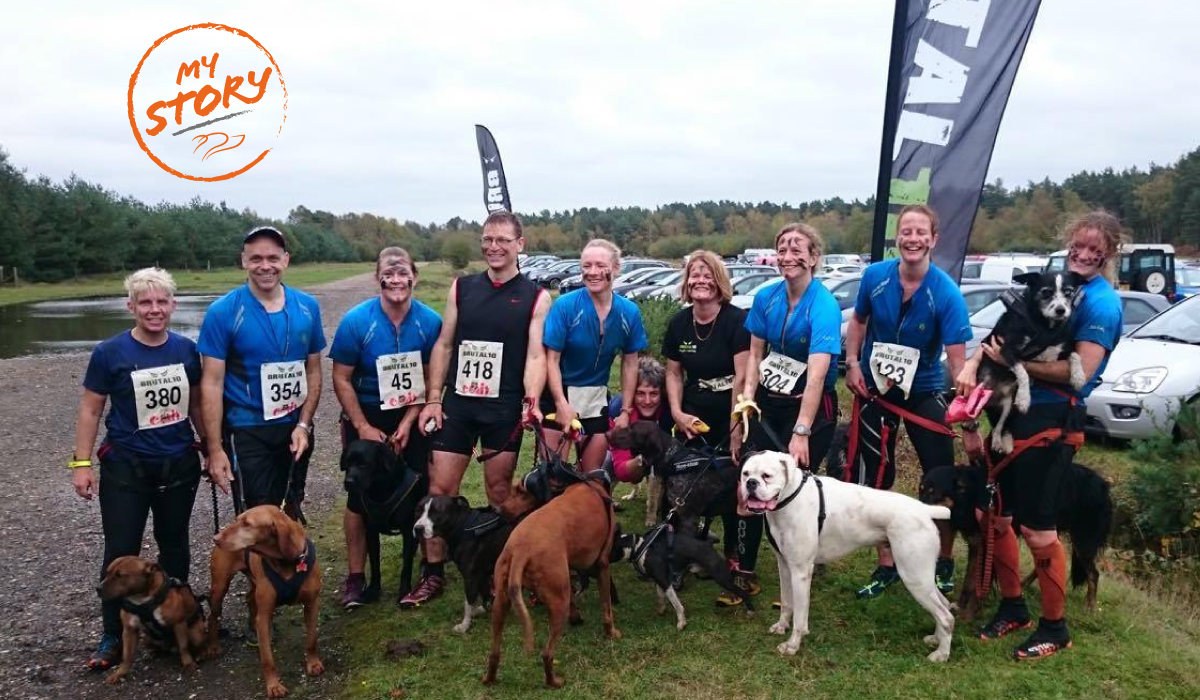 Whilst canicross is a social sport and many friendships are formed as a result, not everyone takes up canicross for the same reasons.

Everyone has their own personal story. That is what makes canicross so special.

We covered Ginetta’s Story recently and many people can relate to it – people who don’t necessarily enjoy running in general but have discovered just how much fun it can be when doing it off-road with their best buddy.

The latest article in the My Story series is about Juliet O’Brien and her three adorable dogs; a Boxer named Boo (age 5), a Boston Terrier named Nero (age 2) and latest addition, Gertrude or Gertie to her pals 😉 a Boston Terrier/Pug Cross (age 2).

In an interview with Dogfit, Juliet shares her passion for canicross and how it has been a great tonic in helping to overcome some personal challenges. 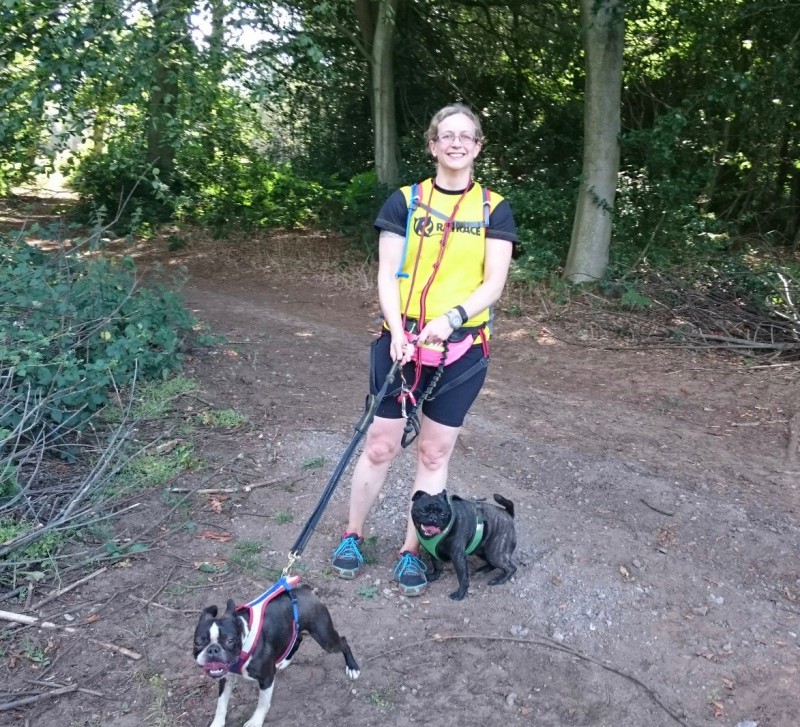 So when did you first discover canicross?

I started running in the Brutal 10k races to raise money for Macmillan Cancer following my partner falling ill to Hodgkins Lymphoma and saw the canicross runners and their dogs at the start of these and loved watching them all get excited before the race.

Together with a couple of friends we decided to enter one with our dogs so we bought some kit, practised running locally and then entered the event. It was one I had run before without a dog so I knew what to expect, though I’m not sure Nero was so keen!

So I started racing dogless at the beginning of 2013 but didn’t start canicross until about a year later when I entered the Bagshot Brutal.

It’s fun, gets me out exercising and means my dogs get really good exercise. Being outdoors, doing sport with my dogs.  There’s nothing better than that.  We all love it! 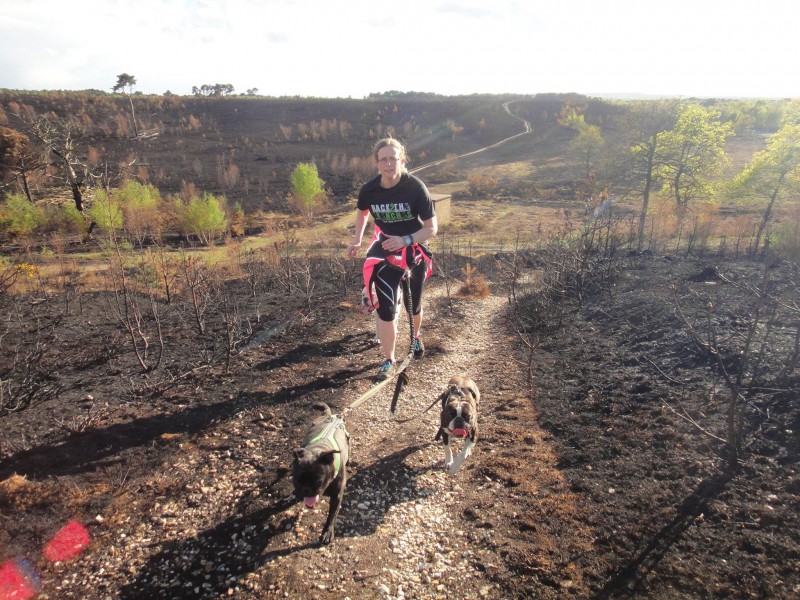 How has canicross been a positive experience for you?

So my partner was diagnosed with lymph cancer and underwent extensive chemotherapy for nine months.  During this time I entered cross country races but it wasn’t until the next year when the cancer came back and the treatment became more intense that I discovered canicross and found a like-minded group of people that loved dogs and loved running.

This was pure escapism from the daily grind of the cancer treatment and hospital visits and kept me focussed throughout.  It also meant our dogs got out regularly with other people and dogs – something they love – and it kept me sane!

What other benefits have you experienced as a result of doing canicross with your dogs?

My fitness levels have increased. I can run further and faster and, as I run with a group of friends, I go out running at all times and in all weather! That is a huge motivator. 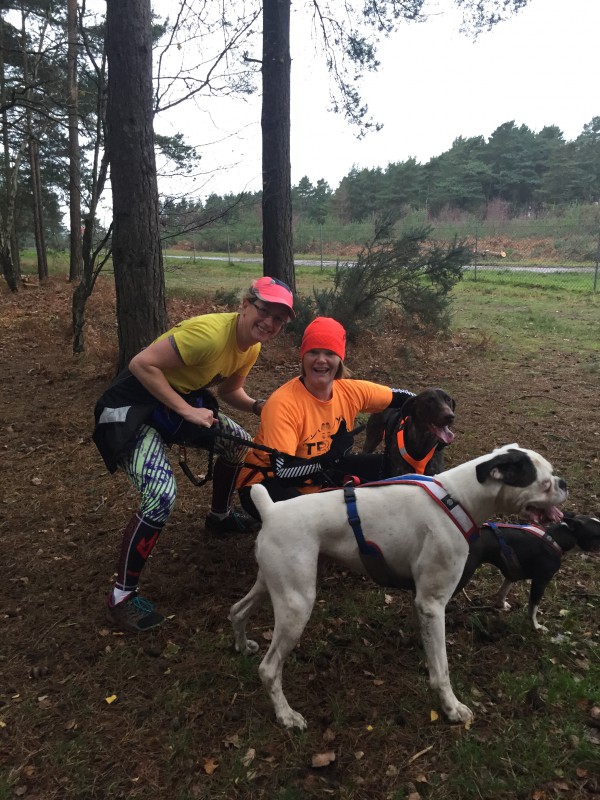 And what about your dogs? How has canicross been a positive thing for them?

They love the interaction with other people and their dogs.  Boo Boxer absolutely loves people so is really happy to come out and get hugs and kisses from all the other humans.

Nero is a true pack animal and is totally focussed on pulling and running as a pack – he gets so excited when we go out for a run.

Gertrude, the rescue Bug, has lost pounds since starting to run – and she loves humans and dogs so it’s a win win situation for all of them!

What is it like running with more than one dog at a time?

Hilarious when they go either side of a tree!  But fine as mine are only small and not too strong when they pull, so they are very easy to control and they tend to keep each other focussed on the running. 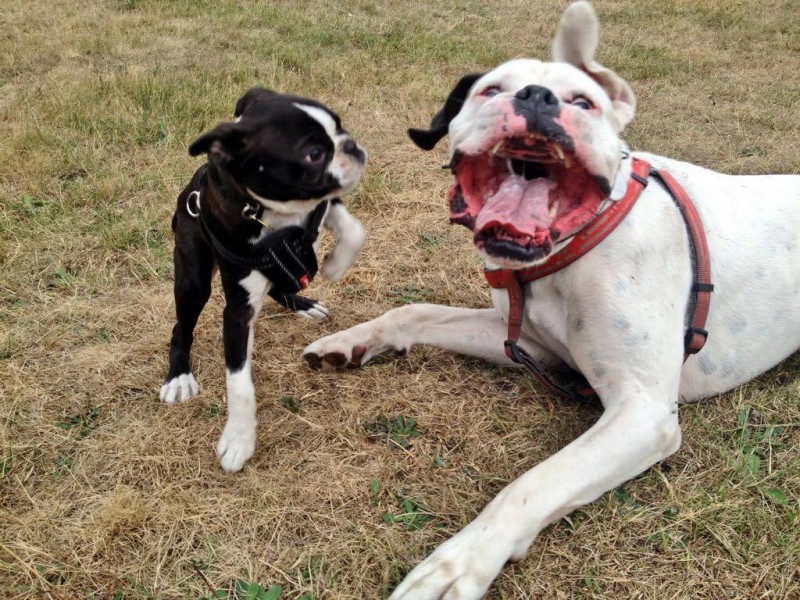 Best pals Boo and Nero prove that all dogs, large and small, can enjoy canicross

If someone was thinking about starting canicross with their dog, what would be your advice to them?

Try it out first – it’s not for every dog.  I bought Boo Boxer the most expensive harness for a dog that pulls – and he doesn’t pull terrifically well!  He now has a lovely harness which he prefers and pulls a little more…sometimes!  But that said, I still run with him – it’s not all about the pulling, it’s about getting out and exercising with your dog in a way that will bring you closer together.

And it doesn’t matter what dog you have got – my smallest only weighs 7kg but he loves it.

What exactly makes canicross so special? How does going out for a canicross run compare to other sports you do?

I’m outside with my dogs enjoying the beautiful countryside!  Its not like being in the gym – and it’s social, which takes the pain out of exercise! 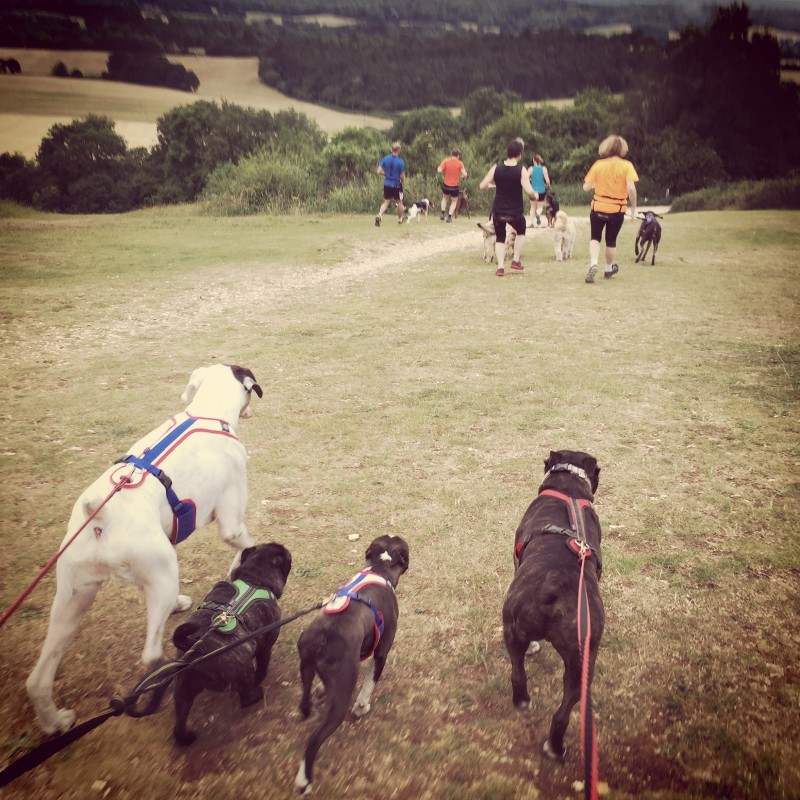 So do you do canicross all year round then?

So in January I entered the Women’s Brutal and borrowed a friend’s dog, Red (who doesn’t mind the water obstacles and the cold as much as mine!) and it was so cold there was ice across the ditches we had to run through.

I have invested in a good head torch which means I can run in the dark – you have to be a little careful and I tend to go slower in the dark as I have weak ankles and don’t want to trip but I still get out there!

What sort of distances do you run and on what type of terrain?

All cross country and flat and hilly – I was up to about 18 miles but currently regularly do around 6 or 7 comfortably.

I have just started training for the London Marathon to raise money for Macmillan and plan to do the majority of my runs, including the longer distances, off-road with my dogs. Another great thing about canicross. No lonely road runs for me!

If you have been touched by Juliet’s Story you can sponsor her via her fundraising page. All donations go towards Macmillan Cancer. Thank you. 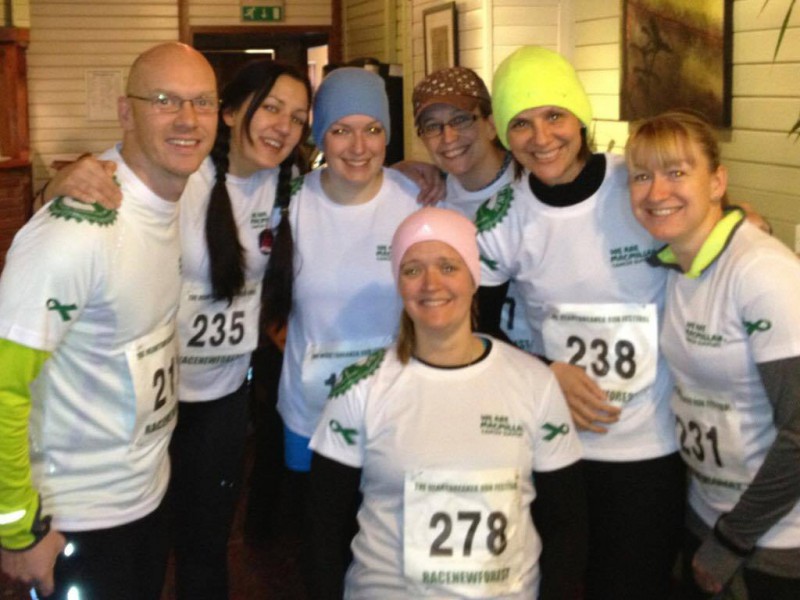