Our latest My Story feature is an interview with Tanja Russell and how she, along with her husband Paul, discovered Canicross with their gorgeous Viszla, Hank, who they rescued from the Vizslamentés charity.

Tanja’s story is a glowing endorsement for rescue dogs and how canicross is such a positive and rewarding activity.

Tell us about your gorgeous boy Hank…how did he end up living with you?

Hank is a Hungarian Vizsla and we adopted him two and a half years ago through the charity Vizslamentés. They rescue Vizslas and Pointers in Hungary and many of them get adopted in the UK.

Initially Hank purportedly lived with an illegal hunter in Hungary but he was put in a kill shelter, presumably because he wasn’t a very good hunting dog. He then had a range of foster families and failed adoptions (including one family whose house burnt down) before he found his forever home with us.

He was already six at the time we got him so he is not a youngster anymore, although he still behaves like one at times and people often ask if he’s still a puppy! 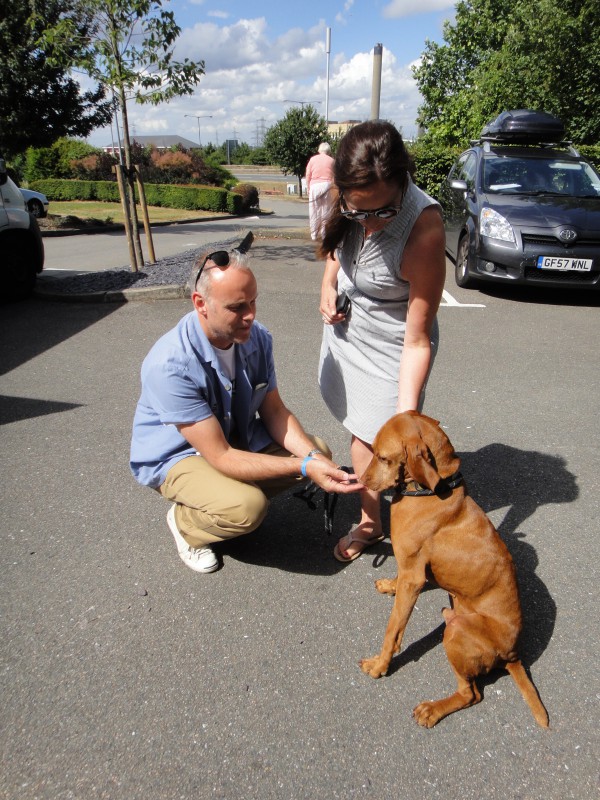 In many respects Hank is not a typical Vizsla, who are affectionately known as “velcro dogs”, as he likes his own space. Having probably lived much of his early life as an outside dog and therefore having had to fend for himself, as well as having spent time in a shelter, means that Hank had to get used to the house, human furniture and close affection.

He is terrified of being lifted up and obsessed with food. He will sniff out every vaguely edible item in the strangest places. However his love for running, sniffing, playing tennis ball, chasing anything small and furry and his boundless energy make him the perfect running partner for us.

Why did you decide to rescue a dog rather than buy one from a breeder?

We did not go to a breeder as we knew that we could not devote the time required for a young puppy.

More importantly however, rescuing a dog is very special – to know that I have given a dog, that was put in a shelter to be put down if no one came within a couple of weeks to rescue him, a second chance makes me happier than anything else.

We asked the charity to select a dog for us that would match our lifestyle and our characters and I have to say that Hank is a perfect match.

He is affectionate but aloof; a little needy but he has the confidence of a wise old man; funny but at the same time serious (especially when it comes to food); a peacekeeper in the pack yet standing up for the bullied and defending other dogs when required; sociable but liking his own space; following you to the toilet but taking himself off to bed when he is tired.

He has earned many suitable nicknames from his friends and admirers: Hank the Tank, Hanky-Panky, the Hankster, Hanky-boy, Hanksome… 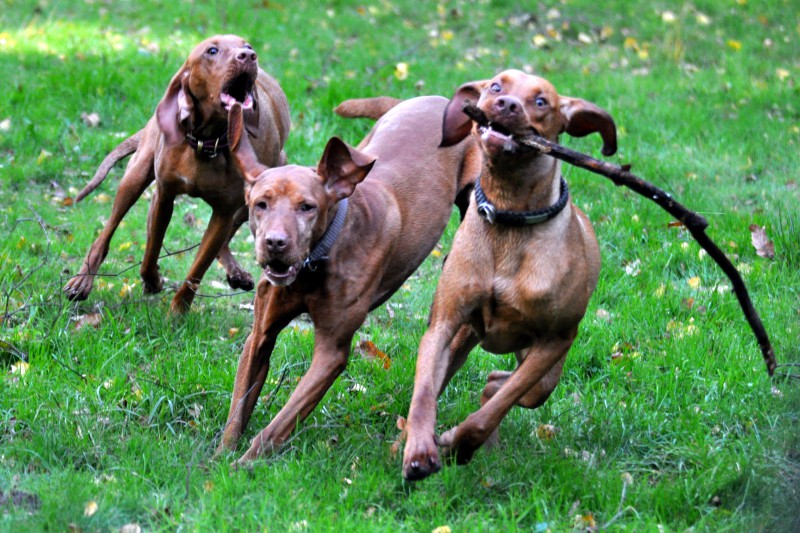 Hank (centre) having down time from canicross with his Vizsla buddies 🙂

How did you end up discovering canicross and what was your first experience like?

We both ran before we got Hank so we always knew we wanted a dog that could come running with us and just before Hank arrived in the UK we found out about canicross from a friend, who incidentally had also adopted a Vizsla through Vizslamentés.

So it was pretty early on that we borrowed some canicross equipment and went for our first canicross run, up St. Martha’s hill no less. It was at this first run that we met some people who we still run with today and who have become very good friends.

The enjoyment of running in a group and the bond you are creating with your dog – it is a fantastic experience and I would recommend it to anyone. 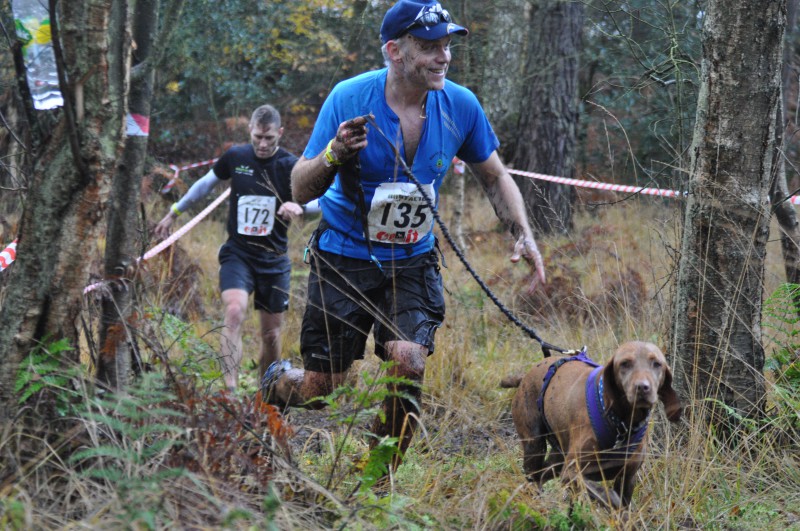 Paul and Hank taking part in a local canicross race

What types of runs do you do with Hank?

We do a few social runs each week and occasionally we also enter races.

My husband, Paul, in particular has done all the trail runs of the Human Race series with Hank and we have both entered the Brutal 10k runs as well.

The Brutal 10k races are quite an experience since Hank used to be afraid of water (he would not even get his paws wet in a puddle, let alone swim!) so doing a race where you had to wade through waist-deep water was a great challenge but ultimately a great bonding experience and has certainly helped Hank become more confident.

In the first race we did, an annual classic – the Hard as Snails, we were part of a big group of Vizsla rescue owners and we raised money for Vizslamentés. This was only six weeks after we adopted Hank and it is still one of my proudest moments and fondest memories running the race with my boy. 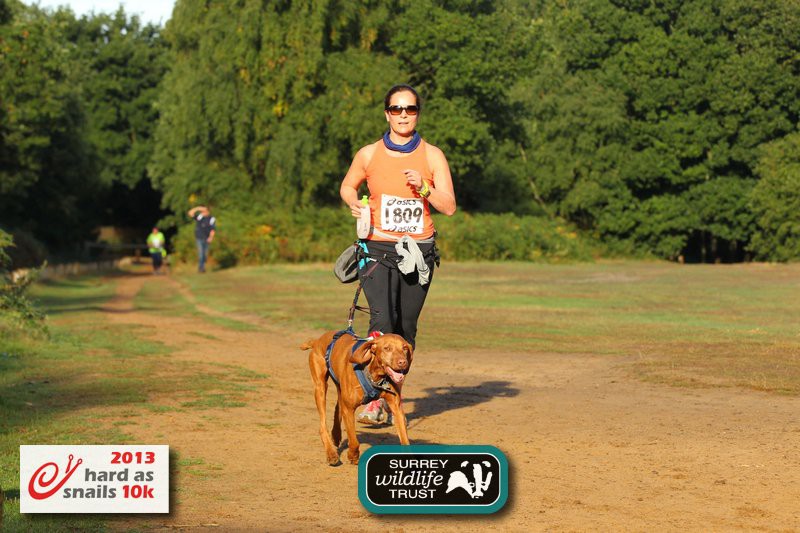 Paul likes the competitiveness of running and he still enters races on a regular basis whereas I enjoy the social aspect of running with my dog: meeting up with my friends and having a nice time being out in the fresh air and doing some exercise.

How has canicross specifically helped Hank?

Canicross has helped Hank in many ways. He has become much more confident, he loves running in a pack and he enjoys socialising with other dogs – all really important aspects in every dog’s life.

Not only does he get the exercise that keeps him in shape, but canicross running also exercises his brain, as he needs to pay attention to where he is going by following the trail and listening to commands such as “left”, “right”, “steady” and “go go go”, rather than just randomly following his nose wherever it takes him. A double bonus!

Of course working together with your dog creates a much stronger bond than just taking him out for a walk and letting him run around. 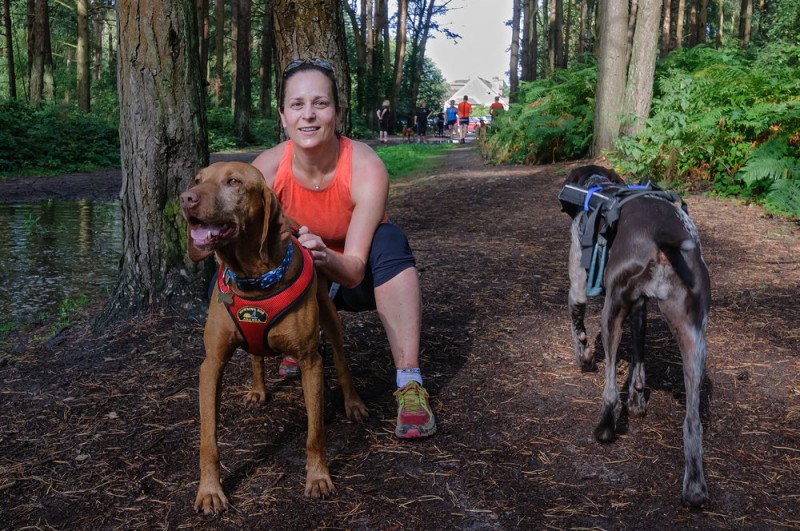 How big a part does canicross play in all of your lives?

Canicross plays an important part in our lives, mostly because we have made such good friends because of it. Dog owners are unique people and we always help each other out, looking after each other’s dogs. The dogs have become such a good friends and a lot of our activities now have to be planned around canicross. 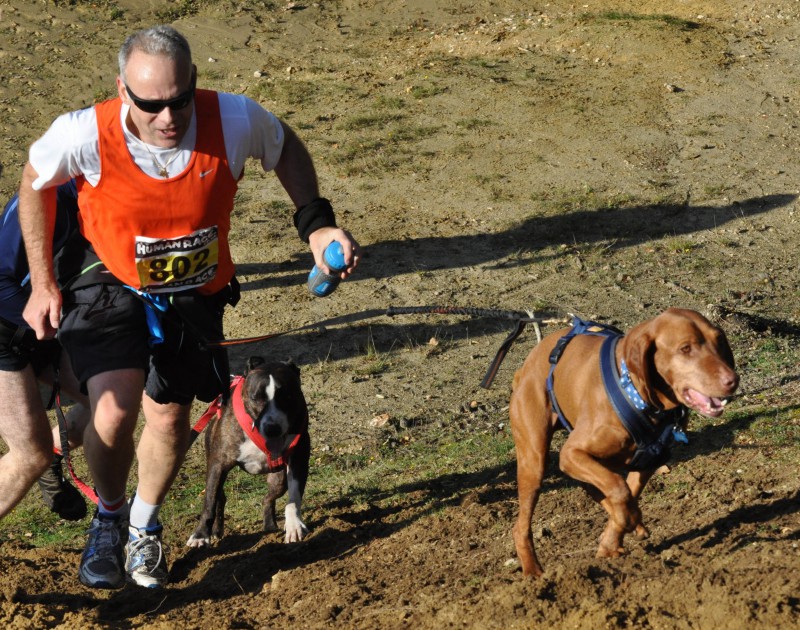 What, in your mind, makes canicross such a good outlet for rescue dogs?

For a rescue dog in particular canicross is such a good outlet because you can quickly establish a good relationship with your dog whilst keeping him closely under control since you are attached by the bungee line.

Your dog learns to listen to you more quickly when running through wooded trails for example than if you just let him off lead in a field.

Also when running in a group, the collective knowledge of running in a pack is often quickly passed on to the newcomers. So ultimately one should see benefits in other areas of your dog’s life when you let him off the lead, etc. 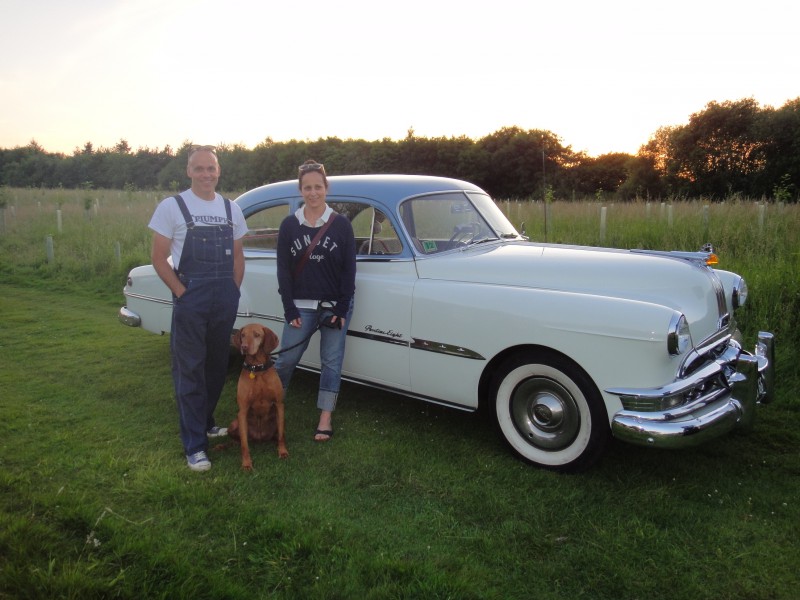 Vizslamentés is the vizsla rescue group of Elveszett Allatok Charity in Budapest, Hungary. They rescue all vizsla and pointer breeds. Vizslamentés UK works in partnership with the Hungarian foundation providing funds and UK homes for dogs that are assessed as suitable. Please email ukteam@vizslamentes.hu for information about adoptions, fund raising and general enquiries.