The Brecon Beacon Half was our first proper trail race.

We had a blast!

If you’re looking for a moderate, extremely canicross friendly event in 2017 with great scenery, a course that makes demands of you and your four legged friend, a fantastic atmosphere, very well organised (The Trail Events Company were brilliant) then this is for you.

The event offers a choice of 10k, Half Marathon, Marathon and Ultra (50km) – something for everyone! 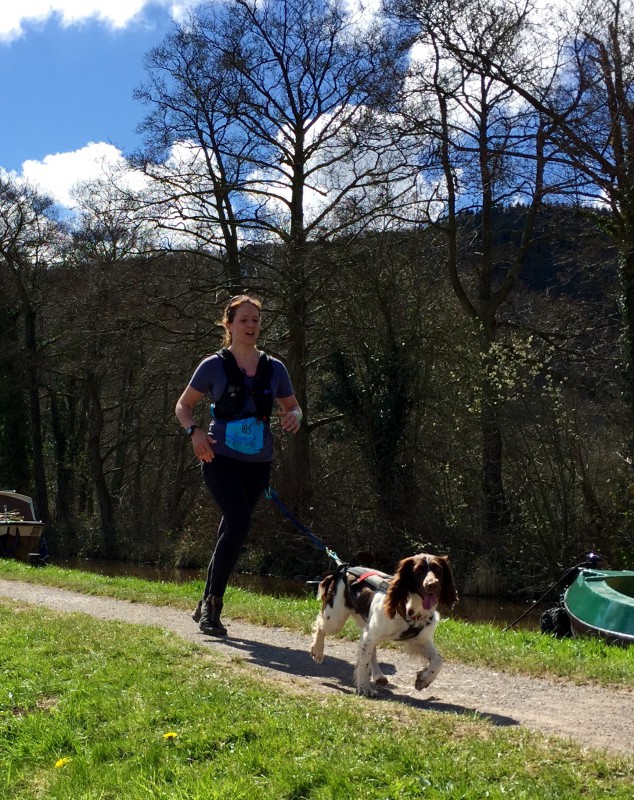 Missy and I were pleased to see that there were about 12 other Canicrossers at the start (it was exceptionally Canicross friendly) and that no one minded the noise of dogs impatient to get going.

We got into our stride easily – a gentle start on a tow path beside the Talybont on Usk Canal. It allowed us to find our rhythm and practice control and commands – essential as the pack (runners and canicrossers) gradually spread out and it’s good to respect other runners and their space.

But it was a start that almost lulled us into a false sense of security. We soon started to climb – a gentle but long climb (over the course you gain 655m) from mile 2 to 7 along the Taff Trail with the breathtaking views over the Talybont Reservoir.

We had to stop to take a photograph before tackling a short sharp incline to the second checkpoint at the highest point in the half marathon course. Each checkpoint was very well set up for humans and their running partners – we didn’t want for anything. Missy enjoyed her bowl of water. I had a choice of water, squash, jelly babies and crisps. I, rather foolishly, forgot to swipe my tag – not a mistake that I’ll be making again.

For the half marathon this was the halfway point. As we turned and looked back at the reservoir we knew we were turning for home. A spectator shouted encouragement adding that it was all downhill from here.

We headed into the woods for our first descent (the marathon and ultra-runners kept on climbing further up the Taff Trail). A steep decline – this was where teamwork with Missy was essential.  Lots of “easy” and “with me”. Her downhill technique is definitely more daring and confident than mine…must have something to do with having four legs and being a nutty Springer. Our training had worked!

The last thing that I wanted was too much help going downhill. We soon found out that it wasn’t all downhill. The first decline was quickly followed by a couple of challenging inclines each followed by longish descents.

I soon realised that my power hike was a more efficient and faster way of tackling the sharp inclines. We’d practiced hills in Richmond, and occasionally in Surrey, which helped but saving energy for the descents was a good idea.

This section took us back along the reservoir. At times it was just me, Missy and nature…not to mention the glorious weather which I’ve been told was is rare in Wales – sounds a bit like Scotland!

After the mini climbs (they felt bigger than they were) and longish descents, we were beside the reservoir and on the flat, including a short road section, before we ran across the dam back to Check Point 1 and turning for home.

I’d assumed that the last section would be an easy home straight … but the last 2 miles included one more mini climb before we were back on the tow path beside the Talybont on Usk Canal with the finish almost in sight. 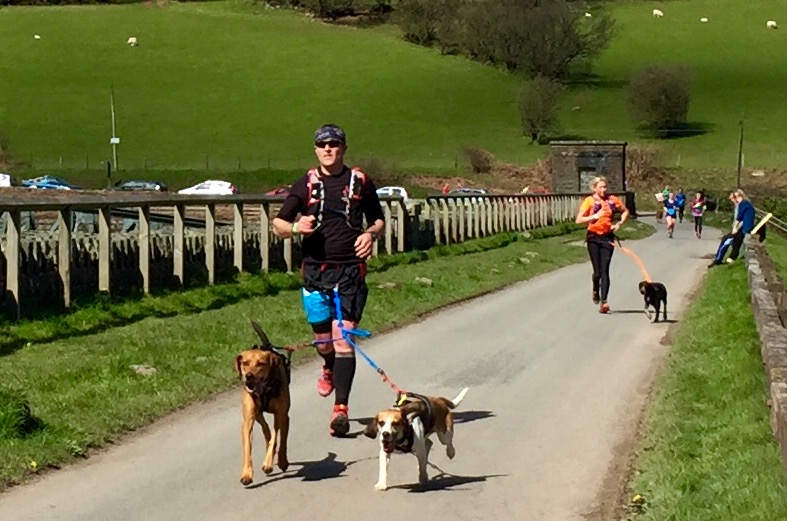 If you been counting, it was (according to my Garmin) close to 15 miles. The weather, scenery and camaraderie meant that they weren’t noticed – even if  the finish was a welcome sight. The finish, like all the checkpoints, was very well set up and very welcoming. Plenty of water and biscuits for Missy, water, squash, oranges, crisps etc for us two legged folk and the staff were very welcoming, professional and attentive.

It was our first half marathon so I’ve got nothing to compare it against. It was a fantastic course and brilliantly organised.  Information before and after the event was excellent, registration was quick, efficient and friendly, the course was well marked (it didn’t tax my navigation skills) and we were given a map to chuck in our packs.

The terrain was relatively firm underfoot (a little rocky at times and the odd soft spot), checkpoints had everything either of us needed and were well manned by friendly and helpful marshals. All in all perfect for a pair of novices and their first half together. 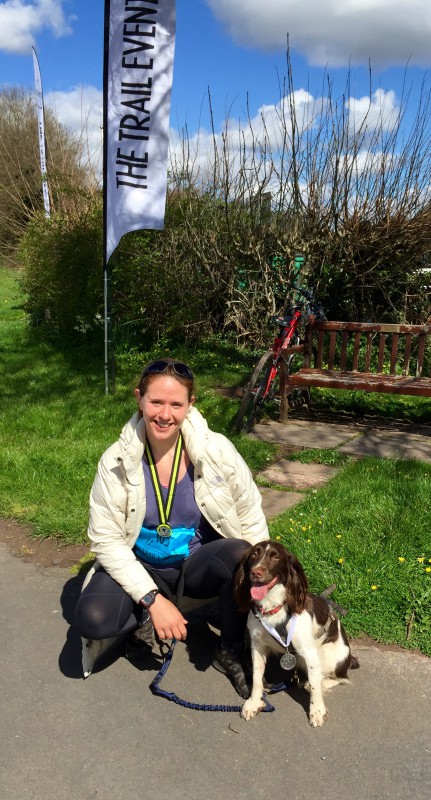 I’d strongly encourage other canicrossers to sign up. It’s worth it. We’ll be back!

We enjoyed ourselves so much, and were so impressed by The Trail Events Company, that we’ve already signed up for two more of their canicross events this Autumn: The South West Coast Challenge (17.5 miles) in September and the Exmoor Marathon in October.

Even running the London Marathon the following weekend and the West London Tough Mudder the weekend after haven’t put me off … but that’s another story!