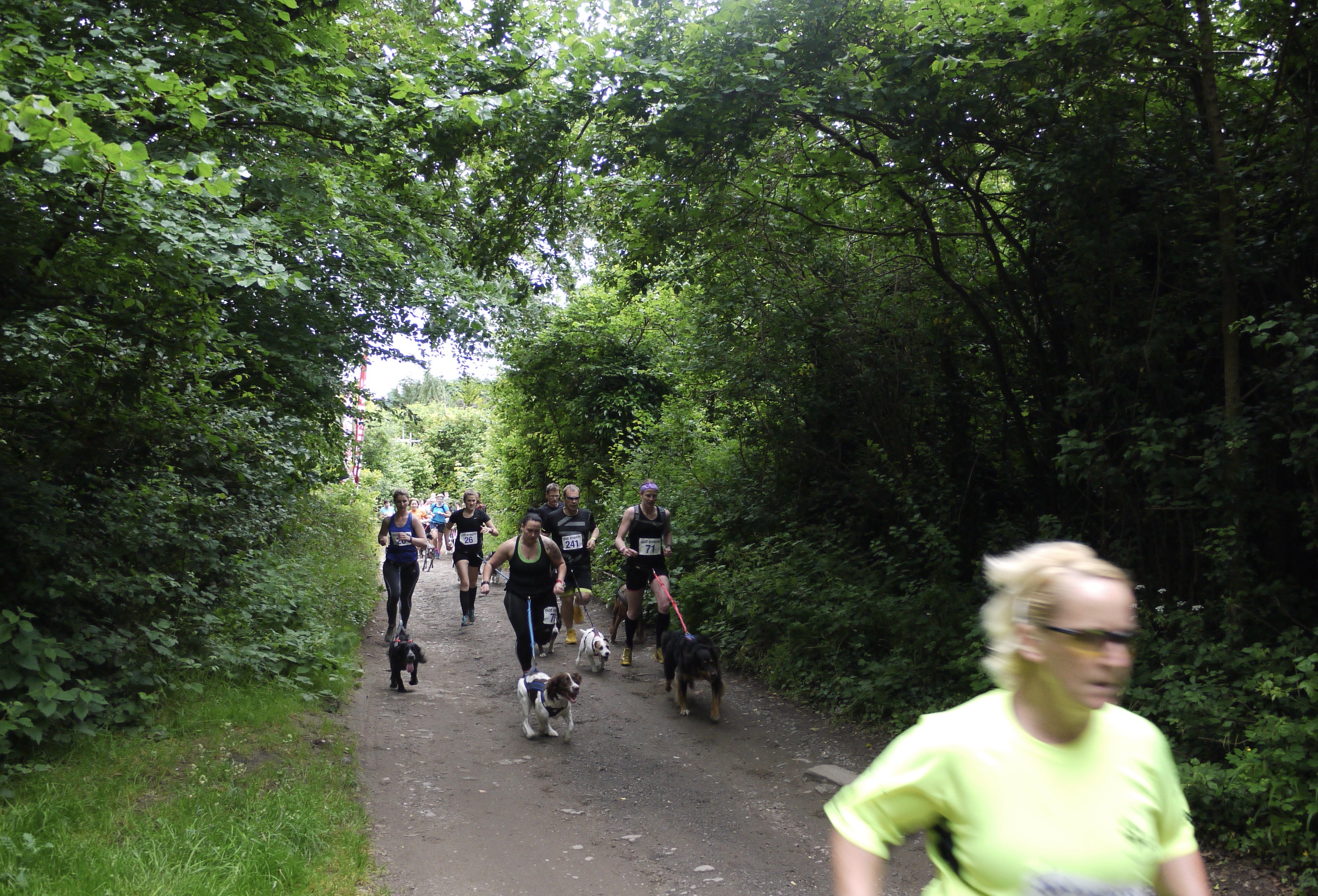 The Hard As Snails event in Guildford Surrey has to be one of my favourites in the canicross racing calendar.

This is partly because it is my local event and set in the beautiful North Downs. But it’s also because it was my first ever canicross race when I took part in it a few years ago (in fact it was only my second ever canicross run full stop!) and so holds special memories for me.

Since that first ever race my love of canicross has just grown and grown. I’ve met so many wonderful people and their dogs.

This year’s Hard As Snails saw 30 canicrossers taking part over the 5km and 10km distances. Many were from the local area but it was great to also see runners from neighbouring Counties traveling across for the mid week race. 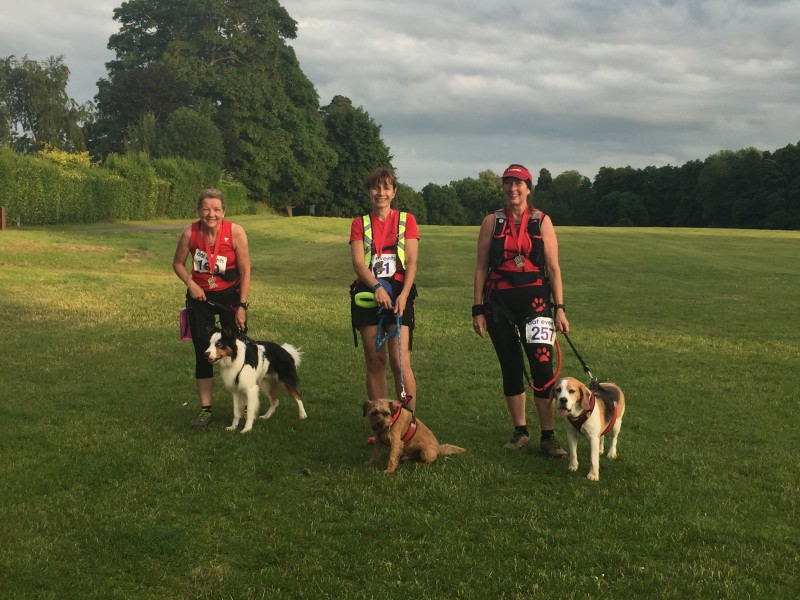 Parking and registration for the event was at Shalford Park, just a short walk away from the start. All runners were given a timing chip (velcro wristband) and a race number bib.

The race itself started from The Chantries car park (off the Pilgrims Way) with all of the canicrossers setting off at 6:45pm – 15 minutes before the mass start.

It was a good idea to start the canicrossers before the mass runners but I would recommend that the area is taped off or dogless competitors are asked to keep their distance from the canicrossers as the dogs are always vocal and excitable at the start.

Common sense prevails here of course but it just makes it safer all round to reinforce these guidelines. 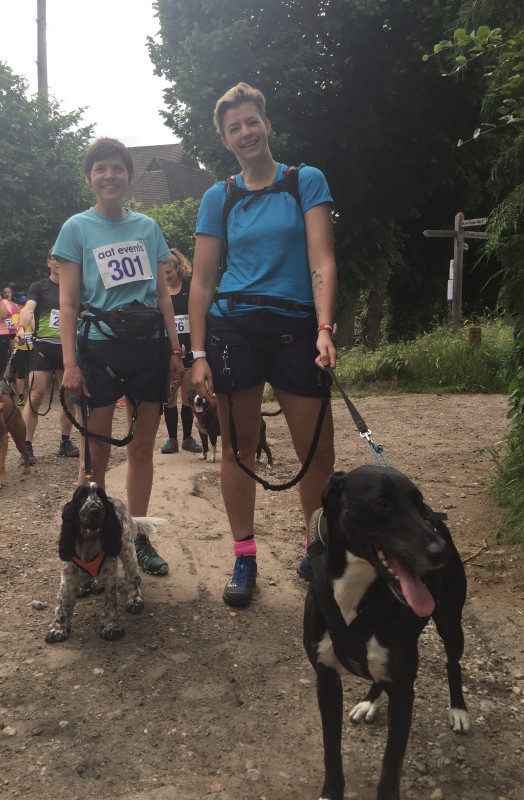 The first 1km of the race consists mostly of an undulating wide path which is hard and compacted so you can get settled into a good pace. But then it transforms to lovely sand (arghhh) and then a short muddy section.

The next km takes you on a largely single track forest trail. Then, after a quick water stop for the dogs, you cross a small country road before tackling the first of the three major hills along the route.

This long, steep climb takes you up to St Martha’s church and for the 5k runners this marks the halfway point which involves a lap around the church before heading back to the finish. 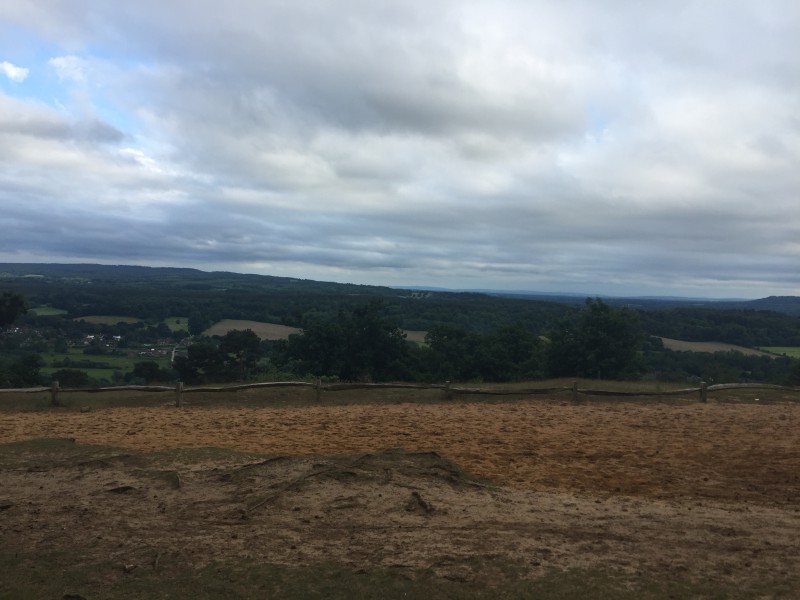 Halfway point for the 5k runners

For the 10k runners the route carries on towards Newlands Corner.

First there’s a fast and sandy downhill section so you need to concentrate hard and this is when your “with me/heel/back” command can come in useful if you don’t have the knees for it!

Then after crossing a small country road you are taken up to Newlands Corner. Which can only mean one thing…another serious hill! 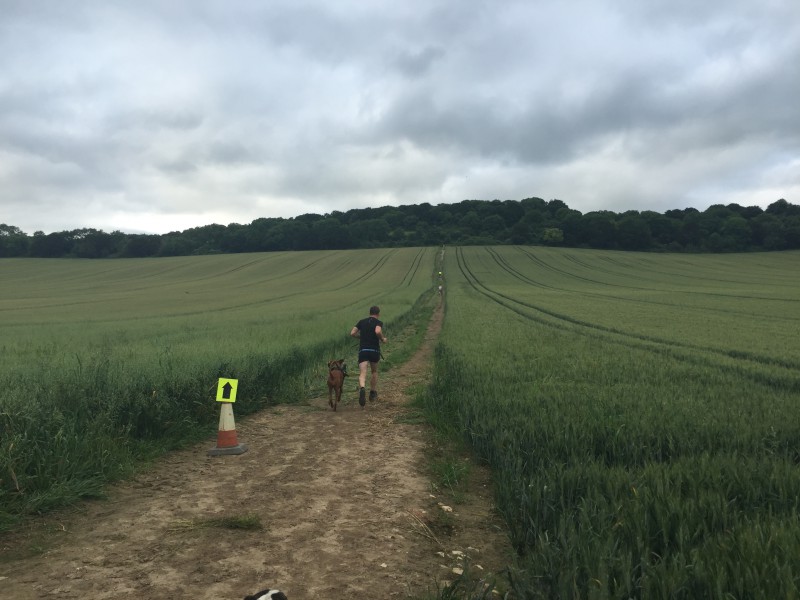 The only way is…

This hill is particularly tough as it starts off ok but then kicks up again halfway up so you really feel it zap your energy.

But then when you think you are at the top you go through an open gate and the hill continues along a narrow path!….thankfully not for too much longer but enough to catch you out if you’d left nothing in reserve.

This also marks the half way point in the 10km race.

When you finally get to the top you are rewarded with a wide, open, undulating grassy path with fantastic views which allows you to catch your breath and stretch it out for a good half km.

Just watch out for the odd rabbit hole! 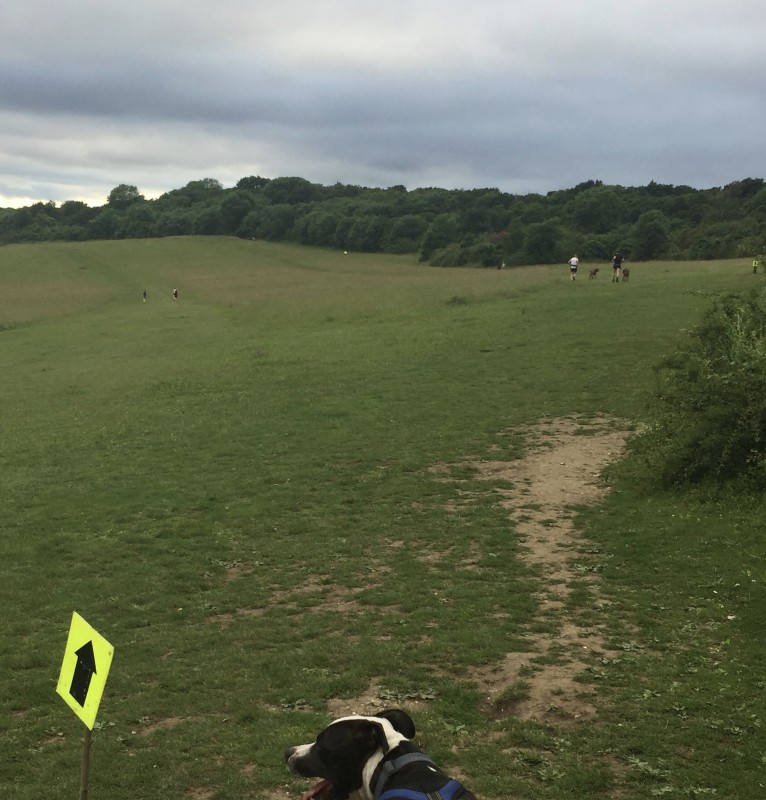 There is still the small matter of the third and final major hill to tackle however.

So after joining a narrow, winding gentle downhill path for another half km you start the long, tough climb back up to St Martha’s church (the same hill we all came down on the outbound stretch from the church).

I personally found this the toughest hill of the lot as by now you are about 7km in and have already tackled two hard core hills, so you can really feel the lactic acid in the legs. And whilst mostly firm underfoot this hill has an evil sandy section two thirds of the ways up.

That said, it’s an amazing feeling once you get to the top knowing that you only have 2.5 km to go and the main hills are over with.

After this, it’s an undulating and fast (it’s all relative!) run back through the Chantry woods to the finish, which is a welcome respite after those hills.

You finish in a nice big open clearing as you come out of the woods and receive a lovely reception from all the spectators and runners. 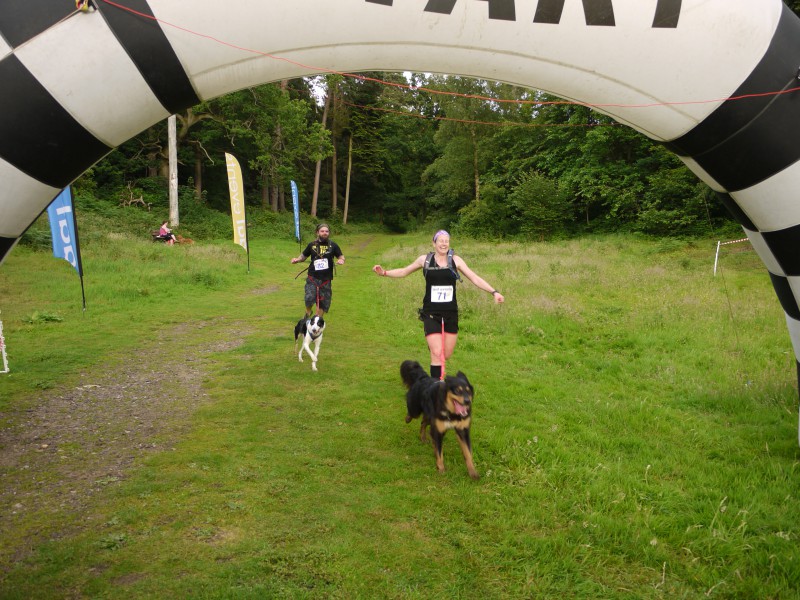 In terms of the refreshments, there was a water bowl for the dogs at around the 2km/8km mark, plus a proper water station and dog water bowl just after the halfway mark.

There were also refreshments at the very end – water, bananas and protein bars for the runners and a more water for the dogs. So we were well catered for.

I would advise that if you have a dog that may need to take on more water that you ensure they are hydrated before the race and maybe carry extra water on you.

It goes without saying that you should never run your dog if it’s deemed too hot/humid for them. Every dog is different, just like people, so it’s a case of knowing their limits.

Which brings me on to the only downside of this event.

Given that it took place at the end of June, it is potentially too hot a race for the dogs. Indeed it was humid on this occasion – although personally my dog coped much better than me!

Also, despite our unpredictable weather, many canicrossers will hold off entering an event this time of year just in case it’s too hot or they may even drop out on the day. In the past this race has taken place in September which is generally a better time of the year for canicrossers.

It’s also better when events are held over the weekend as the traffic around Guildford at rush hour is a nightmare. 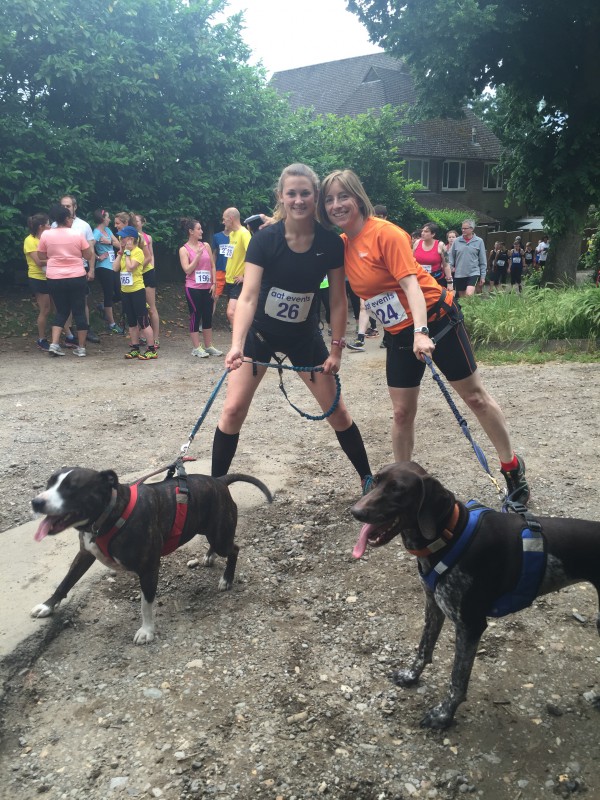 To sum up, the Hard As Snails is a beautiful, well organised and friendly race with compacted trail, sand, forest trails and three challenging hills thrown in for good measure!

Whether you decide to do the 5k or 10k you won’t be disappointed. It’s my local event and I love it ☺

DogFit were proud to sponsor this event. A big congratulations to our winners! 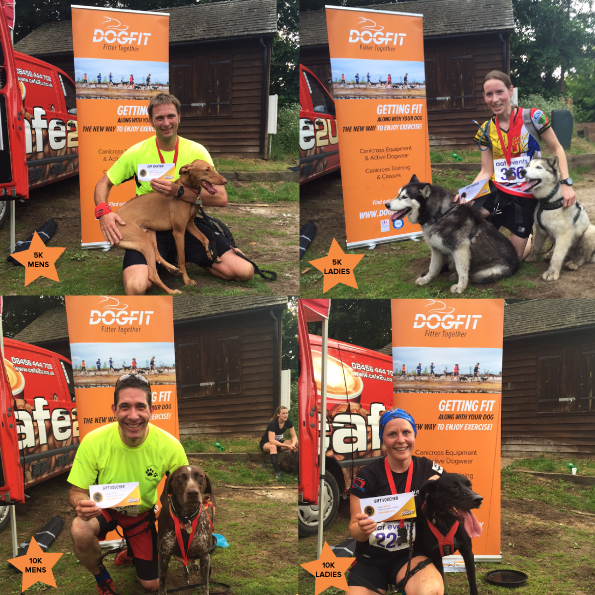