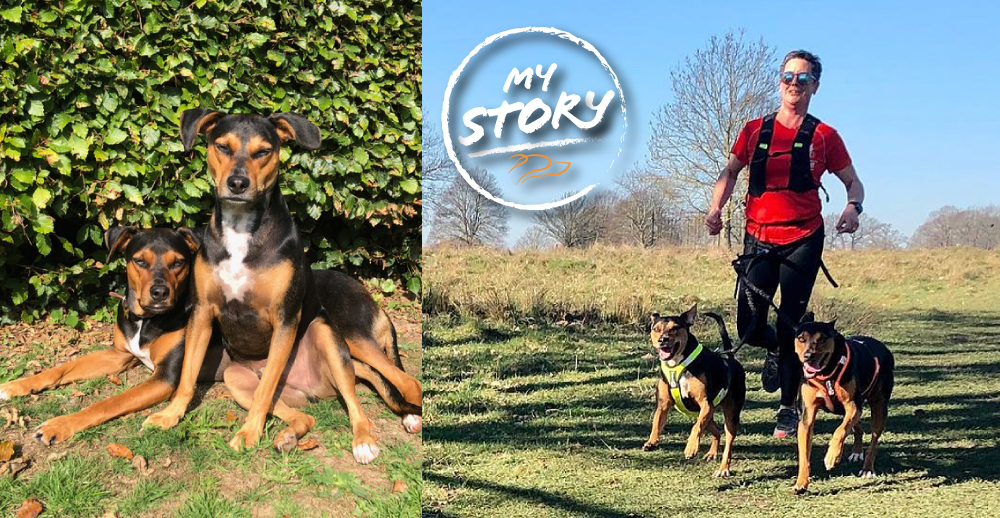 Alexis Fisher shares her story about how canicross has helped her rescue dogs transition from living rough on the streets of Spain to gaining confidence, socialisation skills and ultimately a closer bond with her and her husband…

My name is Alexis and I had my first canicross intro in October 2018 with my local DogFit Trainer in Richmond Park with my dog Bert. We loved it! I then booked another intro session and brought along Bert’s brother Vic to get fitted for a harness and try a splitter lead for the two dogs. Since then, we have been running with DogFit as often as we can, fitting in sessions around my shift work as a Paramedic.

Bert and Vic are rescue mixed breed dogs that were strays in Spain, believed to be almost 3 years old now. They are litter brothers and are thought to have been born to street dogs and then found and taken to the municipal dog pound when they were approximately four months old.

My husband and I wanted a rescue and I spotted Bert (was Alberto) on the Spanish Stray Dogs UK website. We went through the adoption process and Bert arrived with us in December 2016 aged around eight or nine months old.

After a couple of weeks, I received an email from the rescue centre asking if there was any chance we would consider adopting Bert’s brother Vic (was Victor) as he was being attacked by the other dogs since Bert had left and had become so withdrawn and anxious that they were worried about his safety in the pound. Vic arrived with us four weeks later in an awful state; terrified of everything and covered in battle scars. 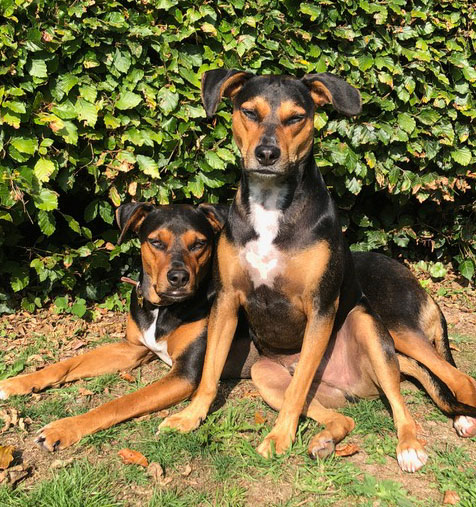 We invested in animal behaviourists and positive reinforcement trainers to try to help Bert and Vic. It was a very slow process as they had no previous experience of being domestic pets and had pretty much been left to their own devices. They needed toilet training and Vic was frightened of my husband Matt and would bark every time he moved.

They were both very reactive and I used to dread walking them as I would be pulled down the street with them lunging and barking at people. Initially we had no relationship with them outside of the house as they had such high prey drives and would not make eye contact with us and therefore could not go off lead due to their lack of reliable recall.

As the months passed, we improved a lot but still had issues with reactivity towards joggers and cyclists.

I discovered canicross after reading on a reactive dogs website that using a hands-free harness might help me manage my two dogs better when walking them together. I googled harnesses and came across the DogFit website and saw that there are actually Personal Trainer led running groups for dogs and their owners…perfect!

I am an active person and could run a slow 5k but I would not describe myself as a runner. I sent an email to my local group and Sarah soon replied with dates for her up and coming introductory sessions.

I was apprehensive about our first canicross session for all sorts of reasons.  Would my dogs take a dislike to someone else’s dog?  Would they run next to each other or mess about play fighting as they often do?  Will they react to others in the park?  Will they pull me over?

Sarah was friendly and welcoming. She brought various harnesses so we could find a good fit and taught me the basic commands. We started on a nice slow run in a small group with Bert and Vic absolutely loving running in a pack with other dogs.

We had one incident where we ended up too close to a cyclist and my dogs reacted to him and unfortunately the cyclist wanted to have a go at me for having out of control dogs. Sarah came to my aid, calmly defusing the situation. I felt very embarrassed about having ‘problem’ dogs and wondered if I ought to continue but Sarah explained that canicross is actually perfect for nervous dogs like Bert and Vic as they get to socialise and have frequent safe exposure to the things that make them nervous instead of avoiding them completely. 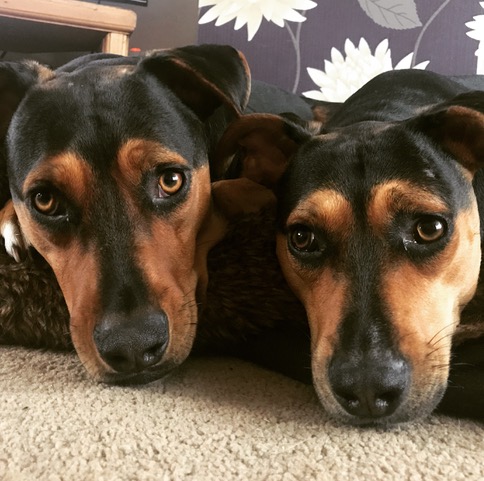 The whole group is excellent as they shout out if there is an oncoming cyclist so I can be prepared and I really feel like everyone understands Bert and Vic’s needs and wants to help us.

I can generally make one or two of Sarah’s classes per week. I did most of Sarah’s Couch to 10k plan and we are now regularly running between 5 and 10 miles per session.

The DogFit classes really work for me as I cannot commit to regular days due to my shift patterns. Most training classes ask for regular attendance but I can drop in to these sessions as and when I am available. I also like the fact that you pay a set fee for a class regardless of how many dogs you have; usually two dogs means double the price!

Since joining the DogFit canicross classess, we have seen a real change in Bert and Vic’s behaviour. They are generally more relaxed and affectionate at home and are now able to tolerate joggers and cyclists passing by. I still need to bring them close to me and reassure them but they are not lunging at every single one they see which is such a welcome improvement!

I feel that it has enhanced my relationship with the dogs and helped us to bond even more. I have started to let them off lead in safe areas in my local park as they are more attentive and less frustrated.

Along with the socialisation for the dogs, I also really enjoy the exercise and company of group running and meeting like-minded dog lovers.