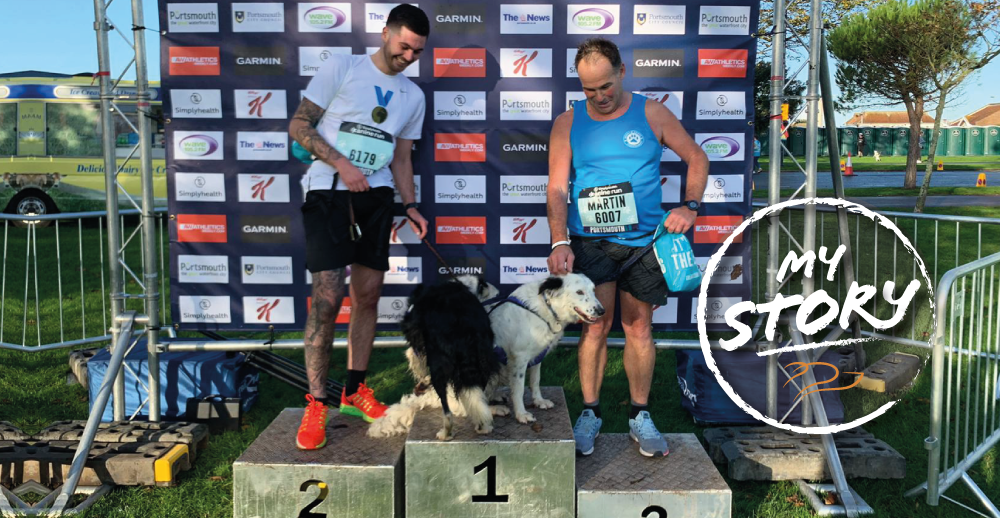 We’ve found that Collies really take to Canicross and love to run with their owners. They are intelligent dogs with lots of energy who thrive on lots of exercise and are known for their stealth and speed.

Canicross can be the perfect combination and we recently spoke with Martin Webb, who has two lovely rescue Collies about their Canicross adventures. I have two rescue Collies, River and Storm, they are both aged 4, and medium sized collies 22kg. River is obsessed with balls and Storm is totally treats driven. He gets very vocal (not barking, but truly talking). After we’ve been for a Canicross run, he will see me having my lunch and then becomes very vocal asking for his! They both have natural sheep herding instincts when both free running off lead, constantly rounding up anything they come across.

I found both River and Storm through the Pre Loved website (www.preloved.co.uk), but got them at separate times. River arrived first, at aged 6 months – a complete bundle of energy. I then found Storm around 5 months later from a sheep farm in North Wales. Storm was a failed sheep dog as he preferred treats and a warm bed by the fire rather than working for a strict farmer and living in a smelly barn. They both look very similar, and get on really well together. I came across Canicross because I had been taking part in the local Parkrun with River and was looking for something more to do with him.

After lots of searching on Google, I found a friendly Canicross group called North Downs  Canicrossers and we started running with them. It has just been one of the best things for all three of us. Since then we have never looked back. We’ve made many friends along the way as well as taking part in events. The longest with have Canicrossed so far is 15 miles. I Canicrossed the Great South Canine Run with River, and she even appeared on the TV.

I’ve also completed a CTS half marathon with them both of them which was great fun. Interestingly they seem to enjoy it most when it is wet and windy, adverse weather conditions and hilly terrain – actually they just love to be out using their energy! Our favourite run so far has been at Swinley Forest with 8-9 inches.of snow on the ground. They loved it..and so did I.

I have had Collies from childhood which is over 50yrs. They tend to be one-man dogs but Canicross has definitely helped them integrate more, not only with other dogs but other humans too. It has improved my fitness no end and given  my dog’s something to relieve their boundless energy and something to focus on. We would highly recommend it.

If you would like to start Canicross with your Collie and need help and advice on kit or classes, please do get in touch.

At the time that this blog has been written, we are running our Virtual Challenge this month to raise money for the Border Collie Charity and you can enter here.